You set the cardinality value in the function.json file, and when it is ‘many’ it means that event will be retrieved from the Event Hub in batches.  When cardinality is set to ‘one’, you might can guess that it means an event is retrieved from the Event Hub one at a time.  Note: this applies to non-C# languages.  Down towards the bottom of this post you will see some of the exception I got and what I did to resolve them, in the case of cardinality and others.  But here is the deal.  When I created my Event Hub triggered Azure Function cardinality was set to many, and the template method was shown as here.

But wait, it got a bit more tricky because event is now events, which makes sense because when cardinality is many, at batch of events are retrieved instead of only one.  What needs to happen in this case is to change the name attribute in the function.json to events.  Or, if you want to run your function with a cardinality of one, then you need to change the cardinality from many to one.

So there is a mismatch in the default function.json when it comes to cardinality and name, as well, with the default main() method template.  Simply, if you want to run cardinality of one, you need ‘name’ to be event, ‘cardinality ‘to be one and use the first code snippet which is expecting only a single event.  If you want to retrieve a batch of events, you use the second code snippet then set the ‘name’ to events and ‘cardinality’ to many.  For your information, you set the size of the batches using the maxBatchSize via the host.json.  Other than that, it went pretty smooth.  There were a few more things to look out for, which took me some moments, but they were mostly figured out through small, subtle references found scattered through the internet.  Now let’s look a bit more about what I did and how I got this to work, starting with some useful links.

The first thing I did was get Python installed on my machine.  Nothing special here, I had numerous versions already installed, but I wanted to make sure the one which showed up in Figure 1, was what I wanted and that it matched the version I was targeting my Azure Function to, see Figure 2.

There are some links on how to create an Azure Function using Python which I linked to above, so I won’t got step by step.  Instead, I show Figure 3 which shows the Visual Studio Code IDE and in the Functions section I clicked on the Folder to create the Project and the lightening bolt to create the function. 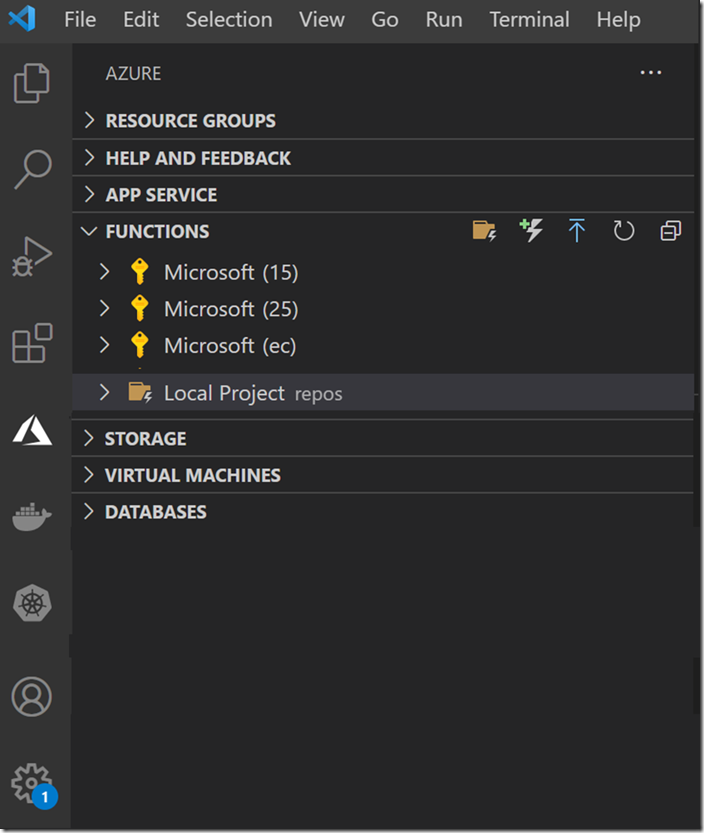 I created a Project into folder PythonFunctions and the function was named EventHubPy which resulted in the following path shown in Figure 4.  Have a look at the default folder structure described here.

Here is where some fun began.  When I tried to run the function locally, using the command in Figure 5, I got some problems which I needed to work through.

I did get the following issue first, but it went away after I had realized I needed to get my versions of Python I had on my workstation cleared up and my environment configured correctly.

I fixed the one you see in Figure 5, which looked like this, by changing the directory from which I was running the func start –python command.  I moved from the function directory to the Project directory, see Figure 6.

I also received the following output when I attempted to run the function.

I restarted Visual Studio Code and I rebooted but that didn’t resolve it.  What I did, but cannot be sure what happened, is that I ran these commands.

and it all started working again.
To send messages to the Event Hub I used a program I wrote called the Azure Function Consumer, look it over and download it from GitHub here.  That program is written in C#, that means you can send messages to the Event Hub using any supported language and the function can be written in another or any supported language. 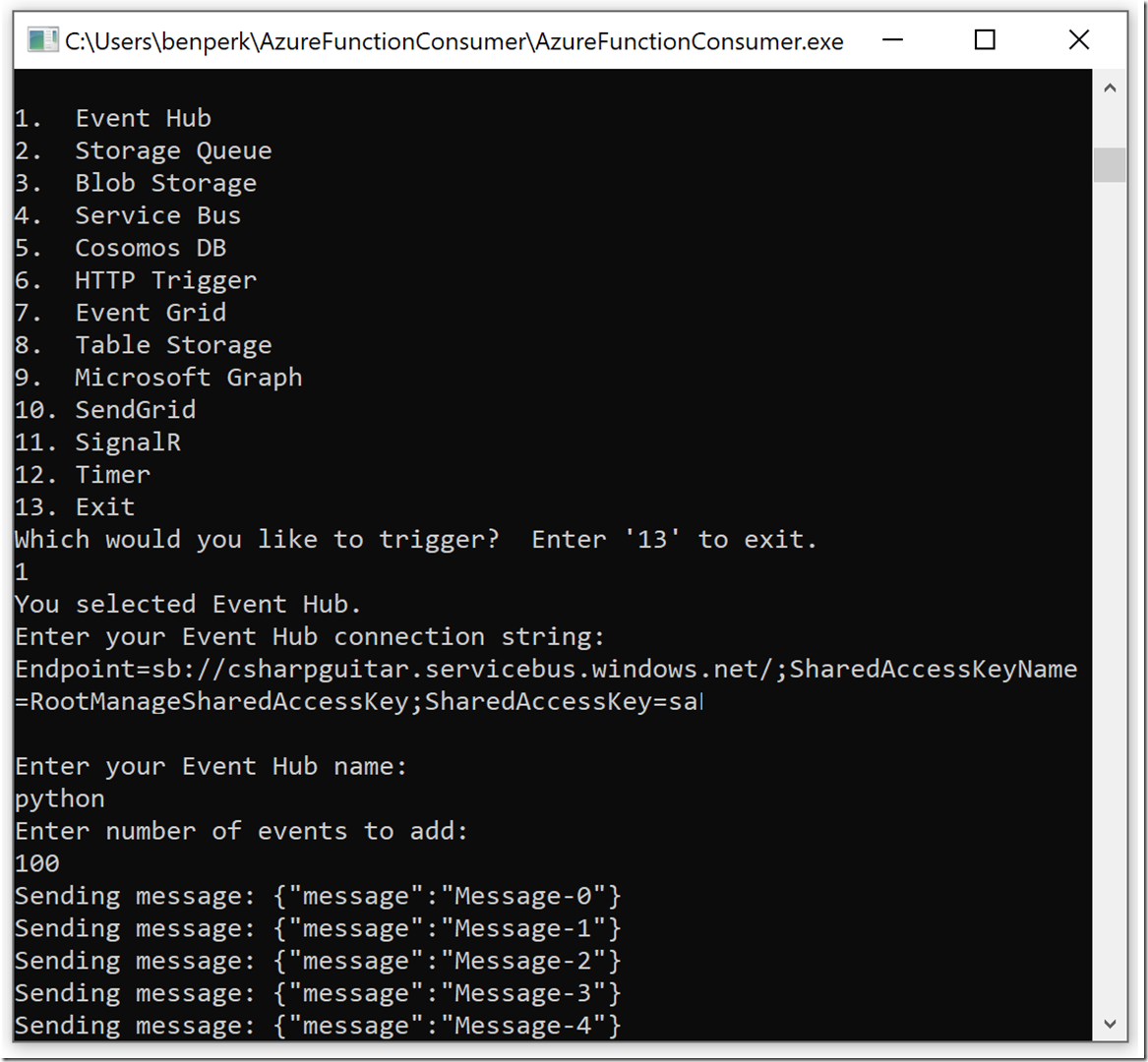 The deployment was successful but I saw this error:

This is discussed here.  It is also triggered when you access the Function via the Azure portal which I did and all was well.

One point, a very important point, is the ‘connection’ attribute in the function.json file.  The value for that attribute is the endpoint of your Event Hub, you added this to the local.settings.json file when you worked with the function locally.  This value isn’t deployed for you, you need to add the value you set for ‘connection’ was a value of the endpoint as its value.  The endpoint value is the same as you entered in the Azure Function Consumer which is referred to as the connection string.  You can get this from the Azure Event Hub blade via the Shared Access Policies menu.

After you have deployed the function to Azure, make sure you so not run the local instance of the program because it too will be triggered / invoked when messages are added to the Event Hub.  Any host which is configured with the access key to monitor that hub will compete with the other hosts which have the same configuration.  You might notice that some messages are not getting processed.  Make sure you protect that connection string and also keep your production and testing environment clearly separated.

By default the the AzureWebJobsStorage was empty, when you create an Azure Function you need to provide a Storage Account endpoint.  This is the value which is required to be the value of that attribute.  There will be a Configuration aka. Application Setting named AzureWebJobsStorage with that value as well.

When I ran func start -–python ––verbose I saw this exception.  As the message states, it is noise and can be ignored.

An Event Hub exception of type ‘ReceiverDisconnectedException’ was thrown from Partition Id: ‘9’, Owner: ‘9185a7e6-8008-4588-afc0-e5e9bf138c23’, EventHubPath: ‘csharpguitar’. This exception type is typically a result of Event Hub processor rebalancing and can be safely ignored.

When the function was invoked after adding a message to the Event Hub, I received this exception.

I resolved this by making these changes to the function.json file:

I resolved this by making these changes to the function.json file:

← Blazor WebAssembly TypeError: Failed to fetch
How to reprocess or retrigger a blob triggered Azure Function →