Before beginning the following labs, be sure to complete the Getting Started section further down in this article.

NOTE: For all of the trigger types an endpoint is a requirement. An endpoint, in generic terms, is nothing more than a accessible unique identifier that is used trigger code.

Did you know Azure Functions 1.x runs(ran) with .NET Framework and 2.x runs with the .NET Core Framework

Although these labs focus mostly on C#, because that is my favorite, you can write Azure Functions in many languages. See the list here.

To be an expert in regards to Azure Functions, you need to know all the attributes and configurations possible for a Function App. Read about them here “host.json reference for Azure Functions”. Note that the host.json file lives in the wwwroot directory of the Function App and is therefore a logical conclusion that changes to that file impact the Function App, I.e. not only the function. There is a function.json file which can be used to make function specific configurations. You must also recognize, perfect and understand the specific configurations per binding type. Each trigger type has some unique settings, like: 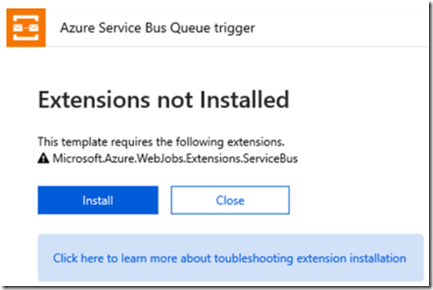 TIP: If you ever need to install an extension manually, add the extension to the extensions.csproj file and run the following command in KUDU/SCM.

If there is a need to add an additional output binding for a Blob Storage account, then the function.json file would be updated to include this snippet. It includes the type, the name of the output parameter that I can reference from the parameters in the Run() method, the direction and some others…

Now, onto imperative. Think of the difference between Declarative and Imperative in the same way you think about design-time vs. runtime. When you know from the beginning which combination of bindings the Azure Function requires, then create them declaratively, however, if, based on the processing of the input to the Azure Function, the output binding can have different endpoints, then imperative binding is necessary. The way you imperatively (or at runtime) define bindings for an Azure Function is by passing the Binder input parameter into the Run() method of the Azure Function, similar to the following.

Then, within the Run() method, you can use the BindAsync() method to dynamically create the output binding and utilize it. For example, if instead of the outputBlob writing to path “test/” (which was declared declaratively) that can be identified at runtime, as shown in the following snippet.

NOTE: do not declaratively declare an output binding if you plan to define them imperatively in the code. Here are more links that can add more details about runtime descriptions of out bound triggers.

NOTE: I am actually leaning for towards using the client libraries for outbound triggers instead of the Binder approach. Let’s see how this progresses over time.

All Function Apps cannot create all outbound types of connections…

Dedicated vs. Consumption vs. Premium

The full description is here “Azure Functions scale and hosting” and will therefore not recover it. NOTE: In the article, dedicated is often referred to as App Service plan. In summary, when you run an Azure Function App, which can contain many Azure Functions in the dedicated plan, it is not ‘really’ server-less because you are running it in an App Service Plan which you have already created, this is useful, however, when your Azure Function App needs more than 1.5GB of memory for example, you can also enable AlwaysOn and avoid any startup latencies. Additionally, on a dedicated plan you are not limited to 5 or 10 minute execution times. Running an Azure Function App in consumption mode is truly server-less, meaning, after a given amount of time where the your Azure Function is not used, the VM will be de-configured and returned to the pool of available resources. When the Azure Function needs to run again, the VM will come back on-line and run. You pay only for the time in which the code it executing. So super awesome!

Login to the Azure portal and click the +Create a resource link on the top left of the page. Search for ‘Function App’ and then select the Function App, as seen in Figure 3. There is also some nice information here “Create your first function in the Azure portal”.

Enter the required details for creating the Azure Function App, similar to that seen in Figure 4. The App name must be unique as it is a global, internet accessible endpoint. For these labs I recommend you create a new Resource Group. I recommend that because once you are finished with these labs, you know which resources you created while working them and can delete them all once you finish. Windows OS, and chose a Consumption Plan, Hosting Plan based Azure Function App for the labs but I cannot think of a reason why any of the labs wouldn’t work in dedicated or premium mode.

Click the Create button to create the Azure Function App. Done! Once created, you are ready to begin the labs.