I wrote this post and this lab about the impact of having debug=true in your web.config file.  The fact is, when you are running in a production environment, you do not want to have debug=true.  However, I was writing a series of NETSH tracing posts:

and I needed to have a request run, without timing out so that all my scenarios completed and those took longer than the default request timeout, therefore I got the Request timed out YSOD seen in Figure 1 because I deployed it correctly without debug=true.  Note that I had deployed my code to an IIS server and was not testing from within Visual Studio or IIS Express.

Server Error in ‘/’ Application.
Request timed out.
Description: An unhandled exception occurred during the execution of the current web request.
Please review the stack trace for more information about the error and where it originated
in the code. Exception Details: System.Web.HttpException: Request timed out.
Source Error:
An unhandled exception was generated during the execution of the current web request. Information
regarding the origin and location of the exception can be identified using the exception
stack trace below.
Stack Trace:
[HttpException (0x80004005): Request timed out.]
Version Information: Microsoft .NET Framework Version:4.0.30319; ASP.NET Version:4.7.2053.0

So, I set debug=true in my web.config which overrides the request timed out setting.  Don’t do this in production because you would create many other problems.  It does make sense that while in debug mode the timeout is disabled because when your code execution hits a breakpoint the timeout should not get triggered…

I am testing from a client, which is calling an ASP.NET Web Forms application executing this code, for example:

The result is displayed to the page, Figure 2 and logged in my NETSH trace. 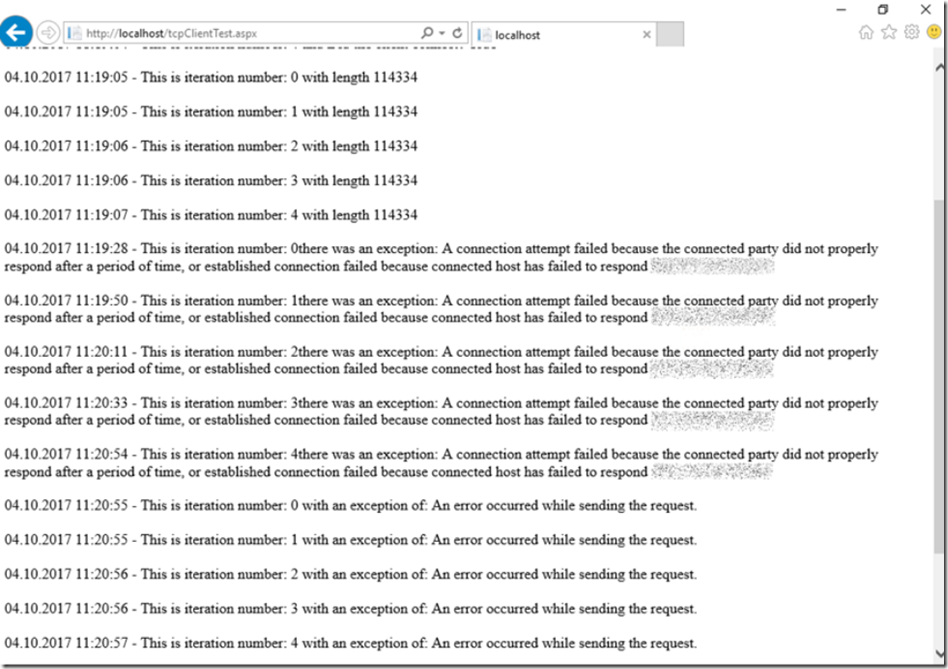