With each version of Microsoft Windows Server comes a new version of Internet Information Services (IIS). With the recent release of Windows Server 2016 comes IIS version 10. Before I cover these new features, here are a few articles which I have already written which you may be interested in:

Continue reading for more details on the above noted new IIS 10 features.

When IIS 10 was first released I wanted to check an see if HTTP/2 worked with ARR, I wrote a post about that experience here. This is also a very helpful article in regards to HTTP/2 on IIS.

Some items to watch out for in regards to HTTP/2:

Some good items to know about HTTP/2:

This is often referred to as ‘inlining’. Using PushPromise API in ASP.NET or the HttpDeclarePush API for native. Using the F12 Developer tools in the Microsoft Edge browser, you can capture a network trace and confirm that you are indeed using HTTP/2, as shown in Figure 1. 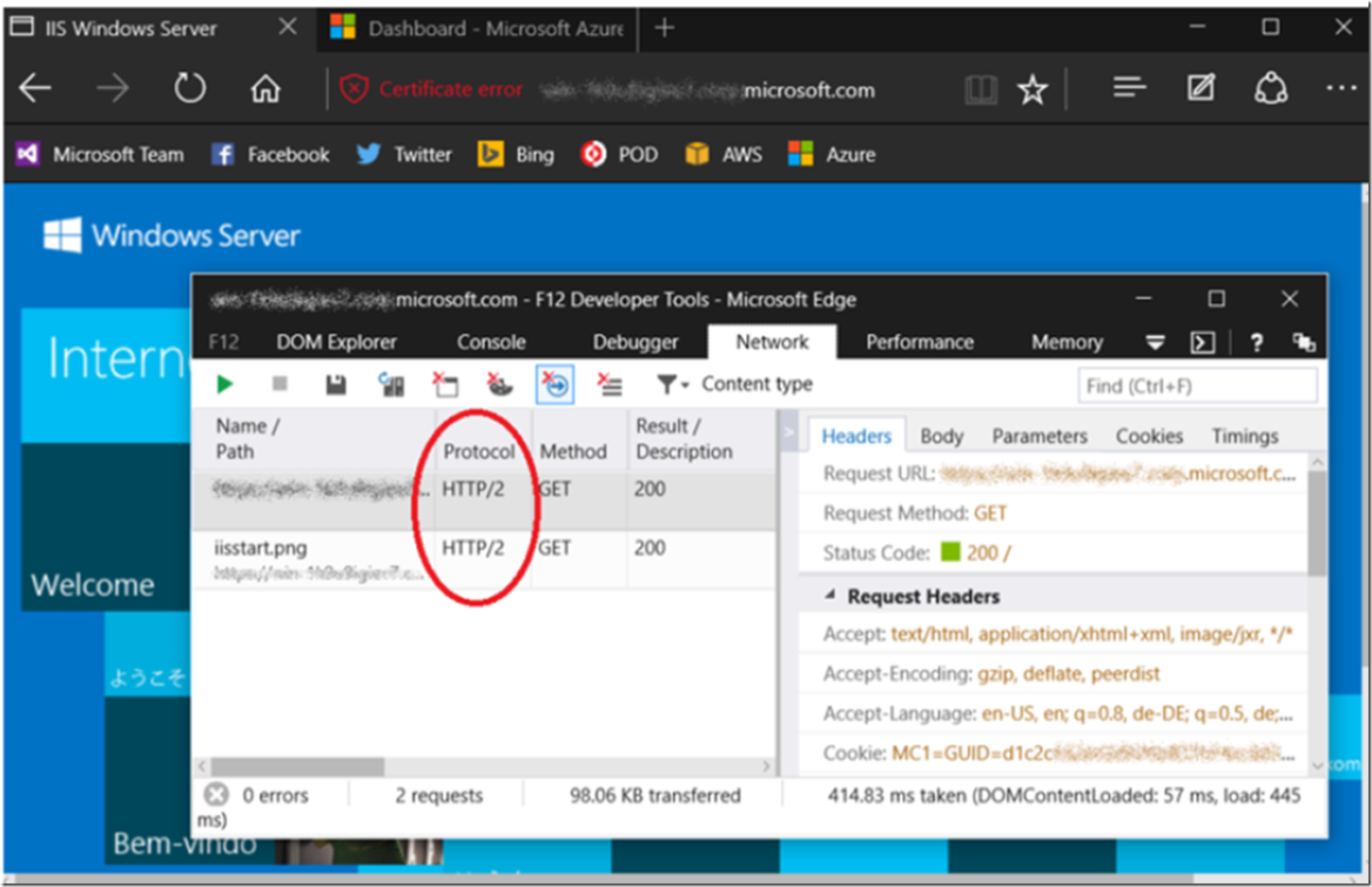 Figure 1, How to confirm you are using HTTP/2 with IIS 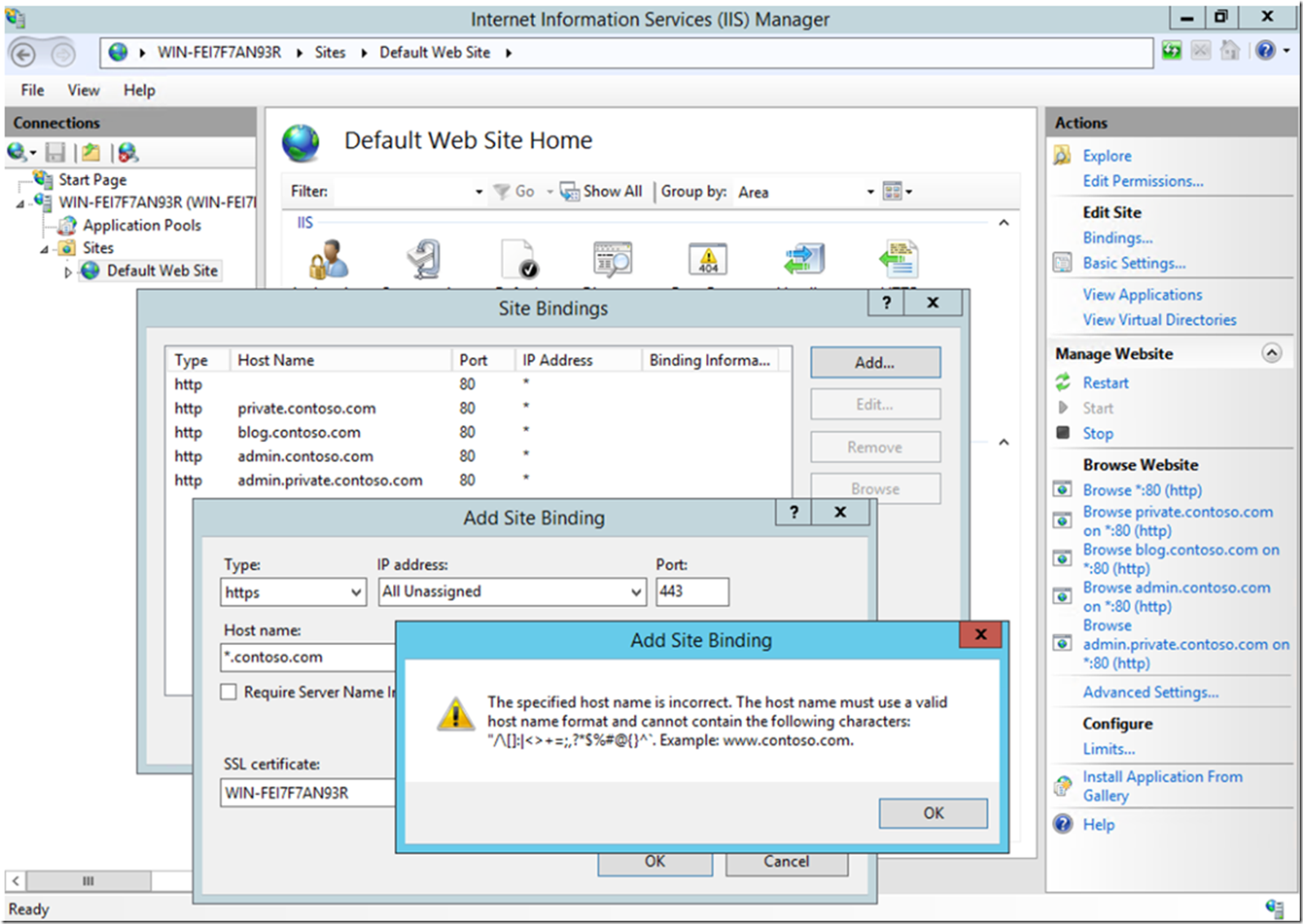 “The specified host name is incorrect. The host name must use a valid host name format and cannot contain the following characters:”

By adding a wildcard host name in IIS 10 as shown in Figure 3, you do not need to create a sub domain binding for each sub domain, instead you can have a single binding for all the subdomains on the web server. One binding for all subdomains will then route to the same site. In your coding you can manage any rendering differences or actions based on the URL used to access you site. 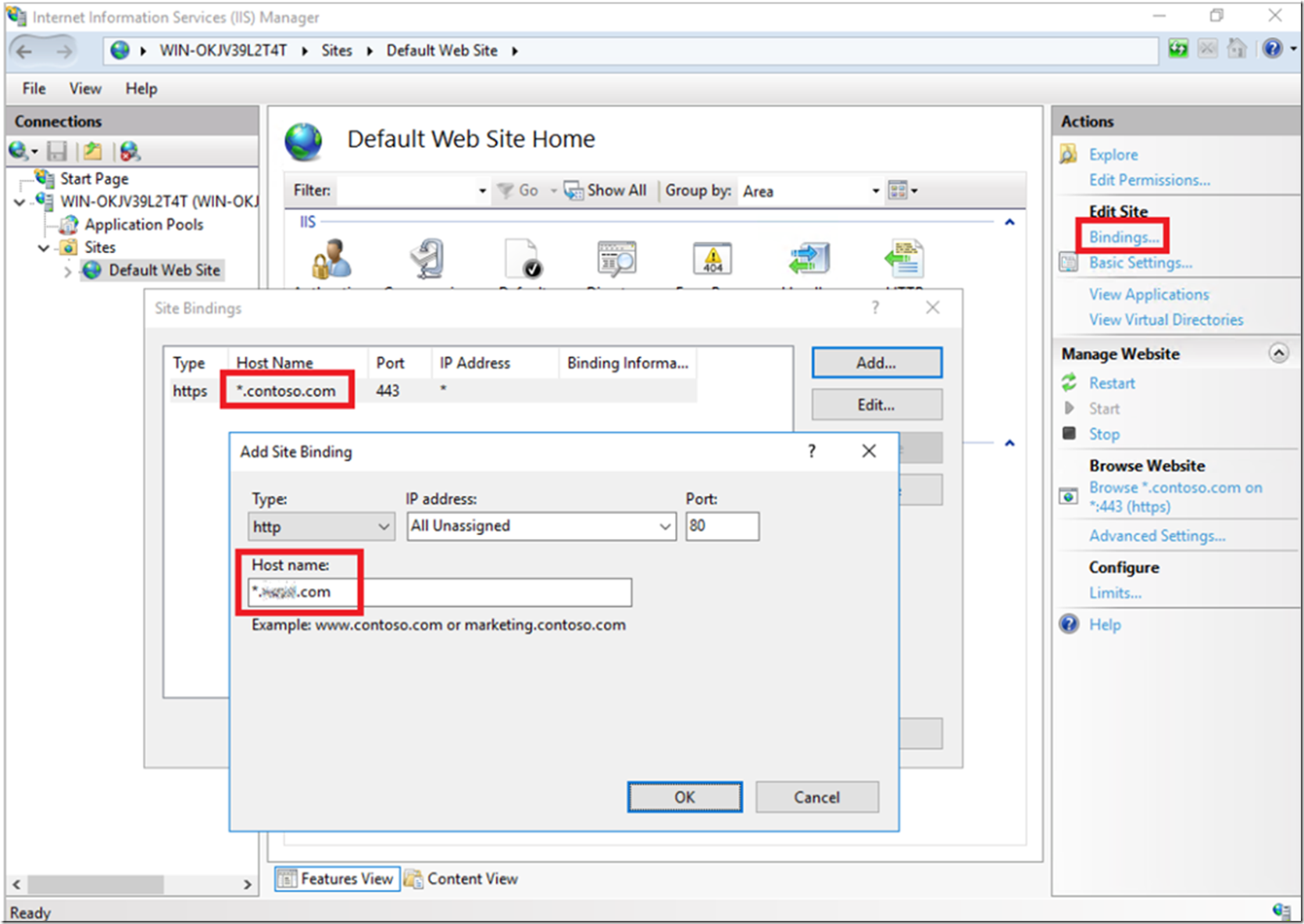 You can also perform the binding using the IIS PowerShell cmdlet New-WebBinding as shown here.

This is a useful addition to the IIS features, it makes things more manageable, IMO.

Environment variables for application pools I cannot begin to tell you how many times I have been called into a customer critical downtime case where the issue was that a 32bit IIS process was trying to load 64bit 3rd party client code or the 64bit IIS process was trying to load the 32bit client utility. To get most of those situations under control was to change the bit-ness of the IIS process or to install the correct version of the client utility so it loaded successfully into the IIS process. Therefore you can use this feature to identify where the correct binaries are stored stored based on the application pool and reference then when the IIS process starts for example:

In addition to the AppCmd syntax and PowerShell cmdlets, you can also make the configuration using Configuration Manager, as shown in Figure 4. 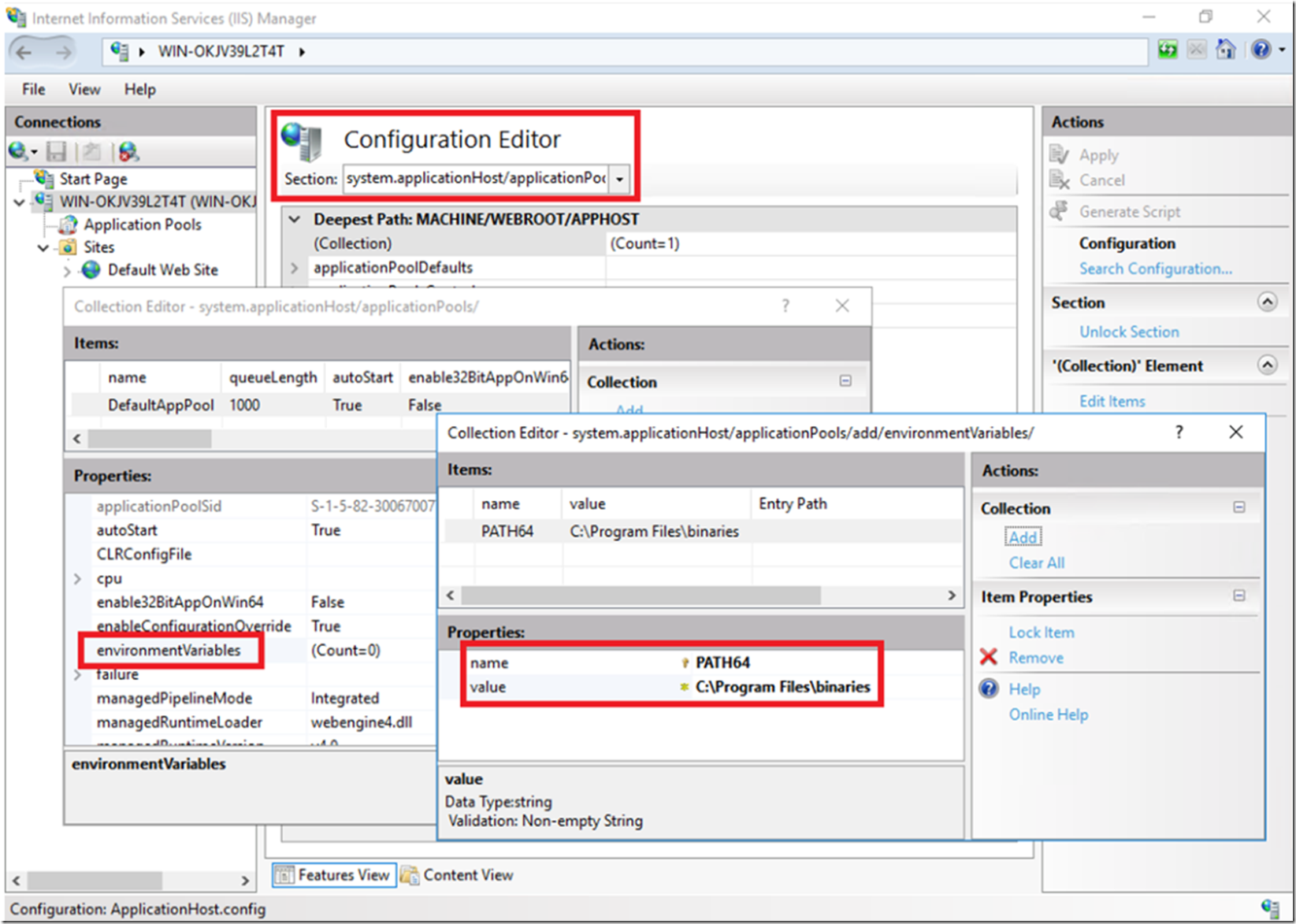 As seen in Figure 5, when the IIS process is running and you look at the Environment variables using Process Explorer, you can see the variable and the value.

I also wrote an article here where I discuss the use of MKLINK (I would think SYMLINK would apply here as well). If your application uses or requires either of those configurations, consider using this Environment Variable features instead.

Then you can access the variable using the following line of code: 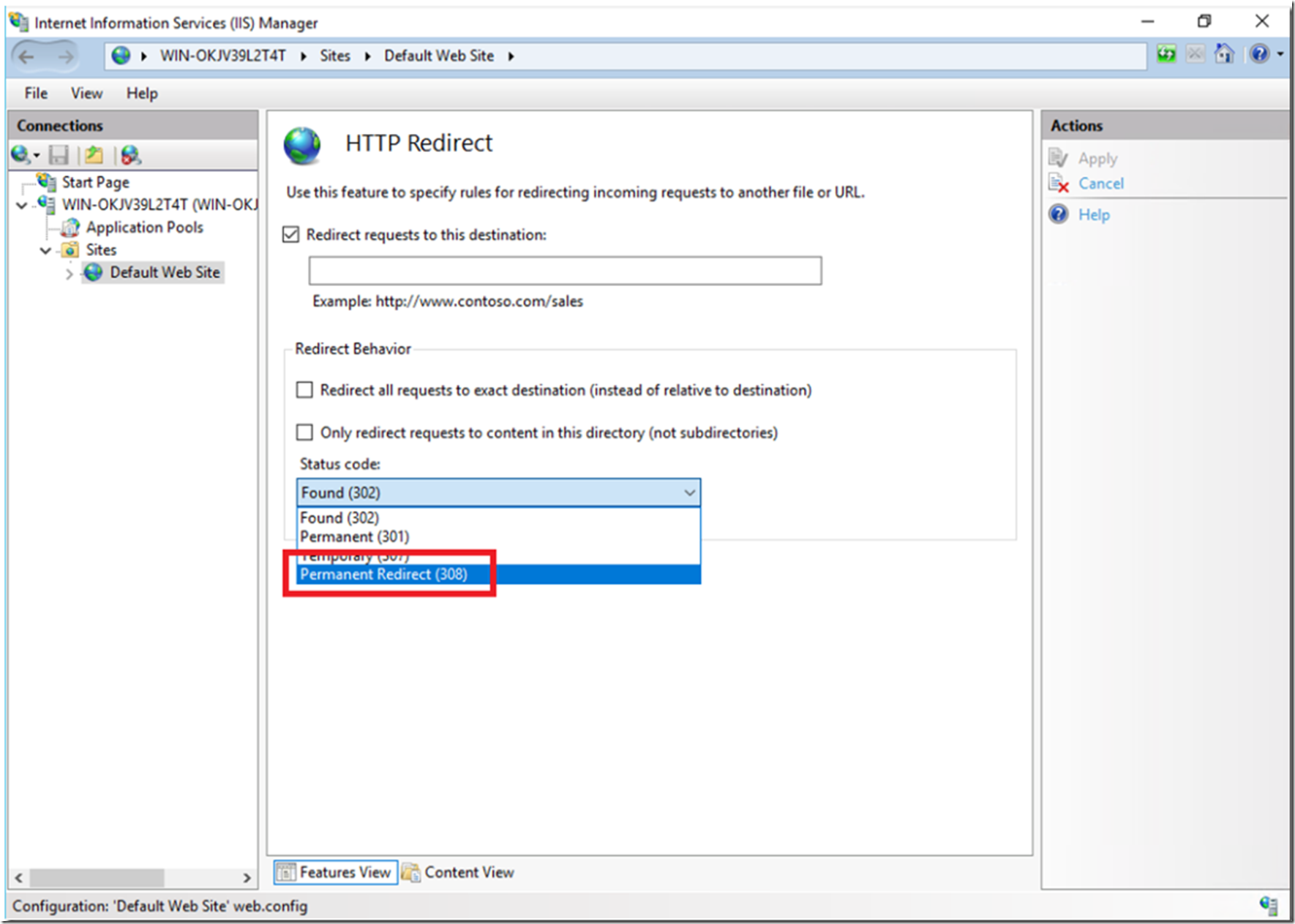 What is the difference between 301 (Moved Permanently) and the new 308 (Permanent Redirect), you might ask?

301 (Moved Permanently) (RFC 2068, 2616) has a lot to do with allowed verbs and some known issues with certain verbs, like redirecting a POST. The requested resource has been assigned a new permanent URI and any future references to this resource SHOULD use one of the returned URIs.

When I first wrote this article I tested this and it did indeed work. Recently notified that it doesn’t always work, I am trying to find out what the status is on this one. Until then, you can use the URL Rewrite rule if urgently needed.

I wrote this article here that explains how to remove the server header using a URL Rewrite rule. This is done mostly for security reasons that anyone searching for a way to impact your web site will not know from the start the OS and web server version running the web site. The more information your can prevent from being available the harder it gets to exploit anything.

I like the Configuration Manager and you can use it to remove the server header, as shown in Figure 7. 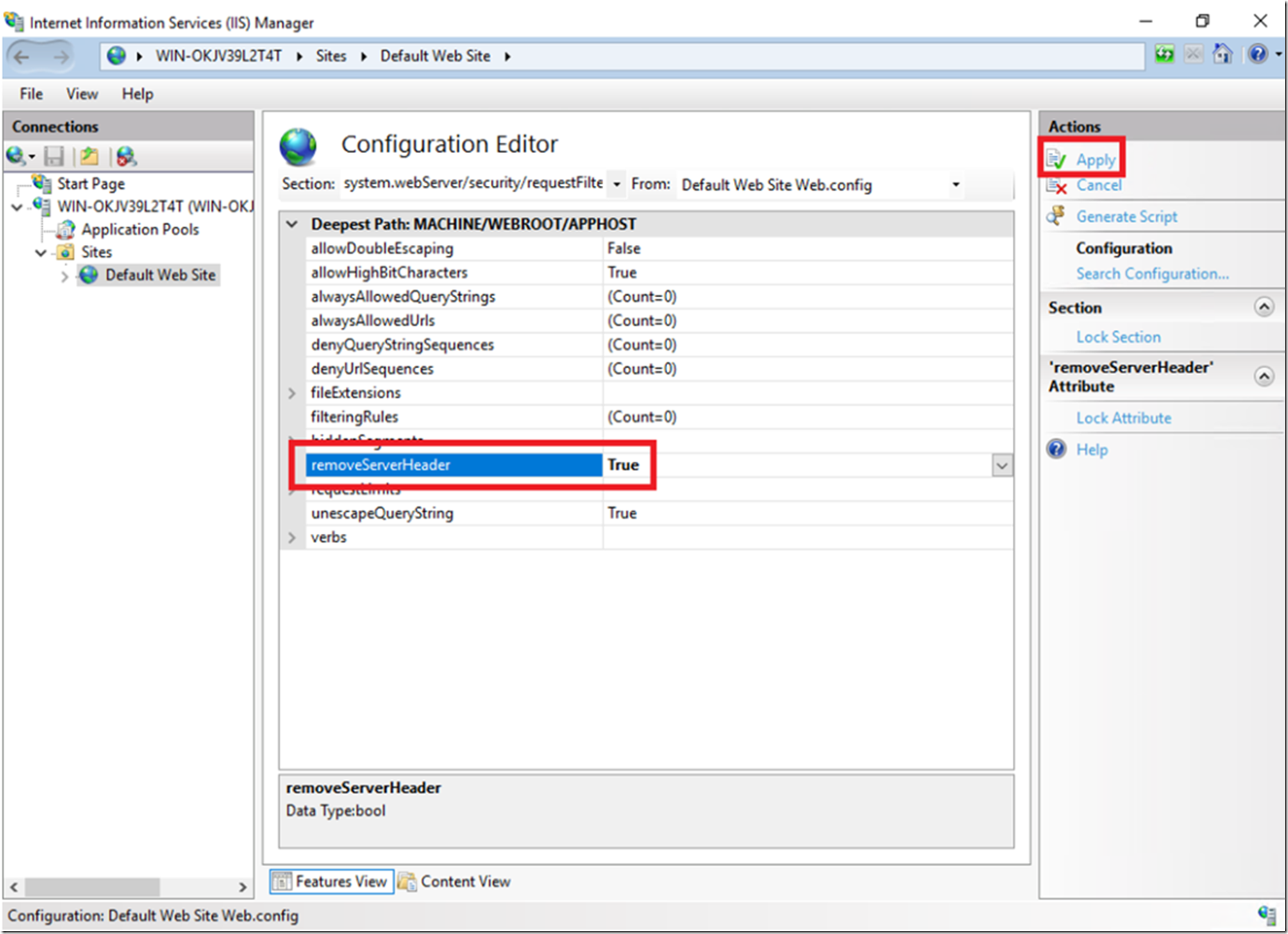 The server header can be removed at the web site or server level, using PowerShell:

As I mention in Lab 4 here (Figure 13 & 14), of my IIS troubleshooting labs here the Failed Request Trace was triggered at just over 10 seconds. The ‘issues’ is that the FREB log is written as soon as the threshold is hit and then stops. So you can see where the threshold was hit but not what happens after it.

You can use Configuration Manager to enable this as shown in Figure 8. 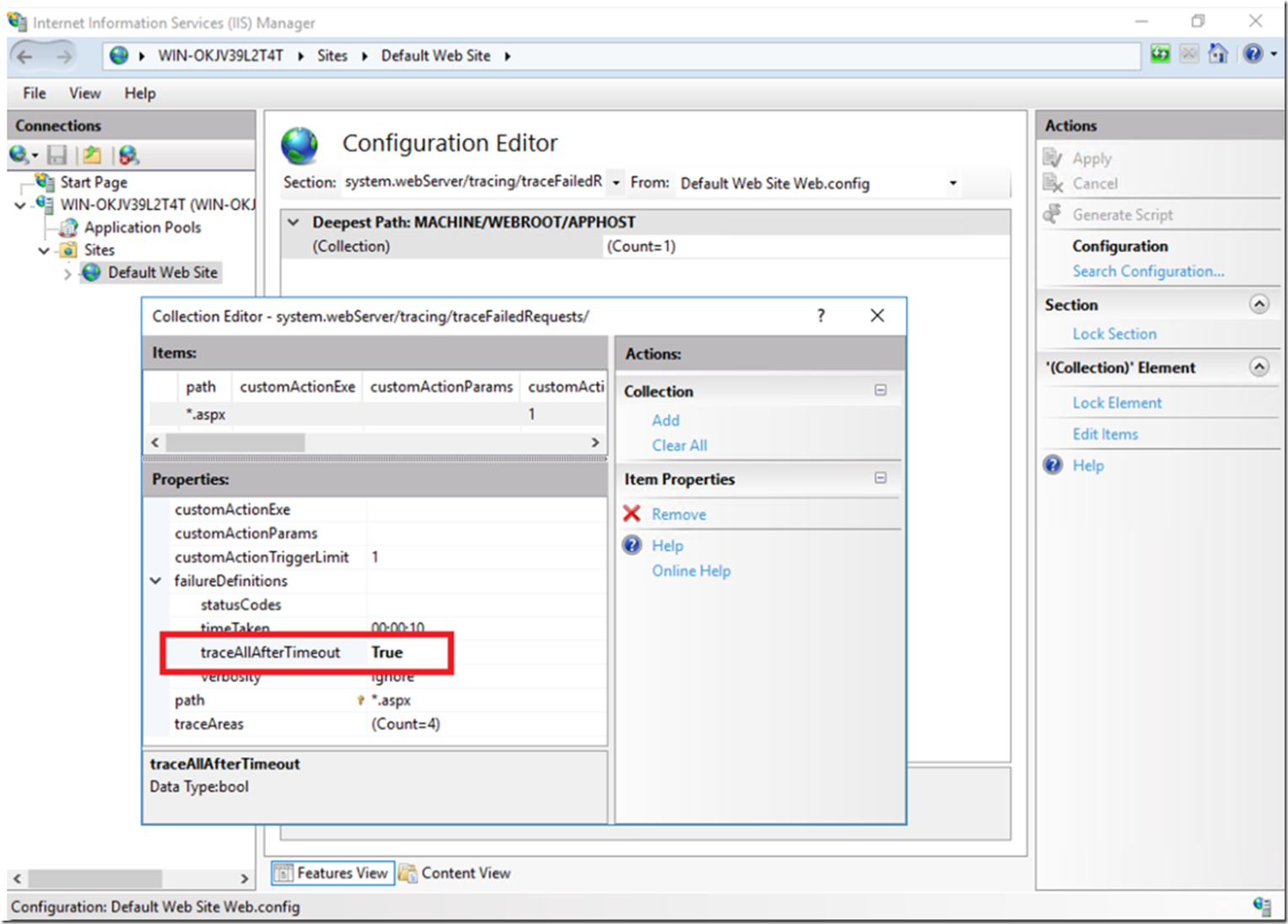 Or you can do the same using either appcmd or PowerShell:

As described here, the logEventOnRecycle changed the default for specifying when to log an event. Pre IIS 10, an event would be logged if a recycle was triggered by a Time, Memory or PrivateMemory configuration. In IIS 10, an event is logged by default based on Time, Requests, Schedule, Memory, IsapiUnhealthy, OnDemand, ConfigChange and PrivateMemory. See that in IIS 10 (Figure 10) the default values are True. 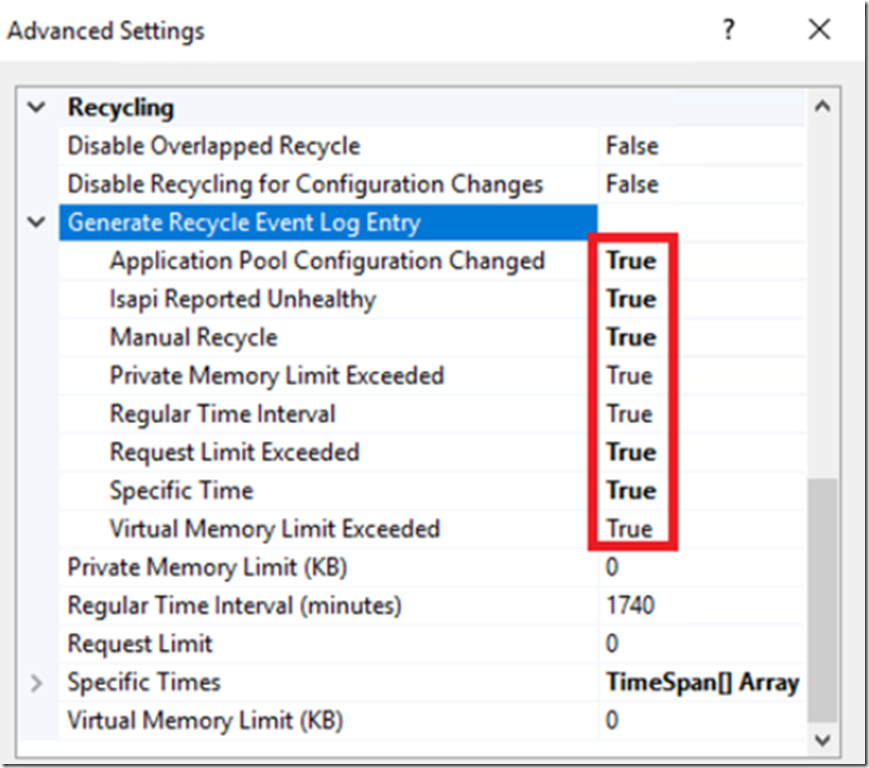 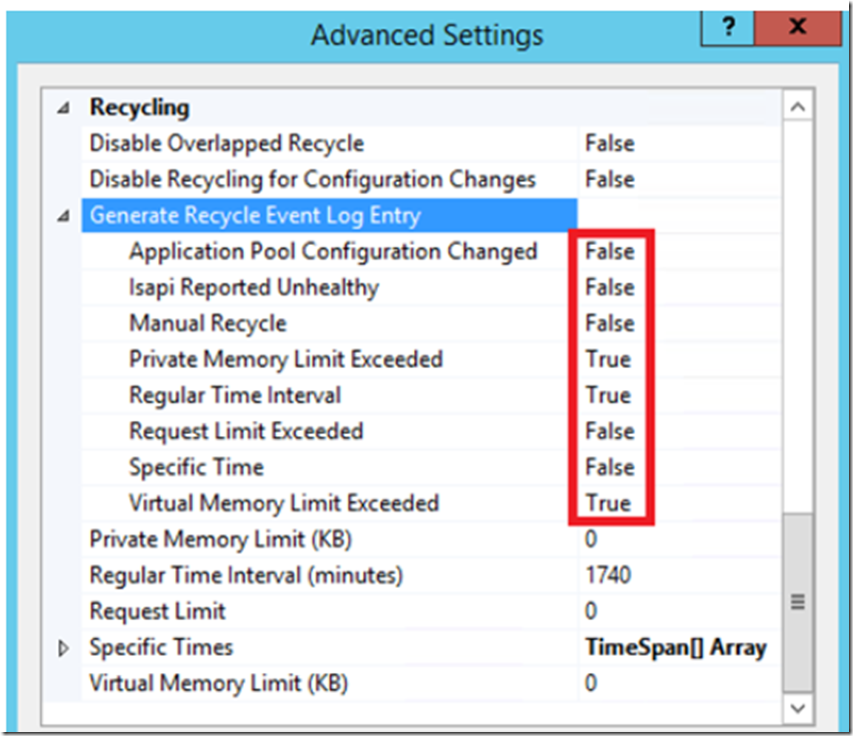 What this means is that in IIS 8.5, when you setup a recycle based on a Request Limit, it would not have been logged by default, you would need to do the extra configuration to enable that logging. Now, in IIS 10, if that threshold is hit and a recycle happens, then it would be logged in the event viewer by default without the extra enable step.

You can simply execute this one IISAdministration cmdlet:

Execute this PowerShell to get a list of all cmdlets within the Microsoft.Web.Administration.ServerManager object:

The ability to GET, create (NEW), delete (REMOVE), START and STOP web sites are all not directly accessible which is a bit more streamlined.

← .NET Core application, where is my EXE, how to publish
How to create and search a Lucene.Net index in 4 simple steps using C#, Step 4 →