Well, the fact that you do not need to use Visual Studio or to install the Bot Framework to get a #chatbot or a generic #Bot up and running still applies. See my other posts:

At least initially this work seemed like a big amount of work, but in the end it turned out to flow pretty well and it all worked without any serious, time intensive debugging.

Instead of using my work machine to install the components needed to setup the Bot debugging environment I decided to create an Azure VM instead. I picked the Windows 10 Enterprise N version and then installed Visual Studio 2015 Community edition. No problems there.

Here are some instructions for setting up the continuous deployment repository. When you enable this you are no longer able to make modifications within the console itself. I chose to use my OneDrive account, as this is just a proof of concept I do not think I need version control nor will I need to setup any additional users. Download a local copy of you source by clicking on the ZIP file and then configure the source code repository by clicking on the Configure continuous integration as shown in Figure 1. 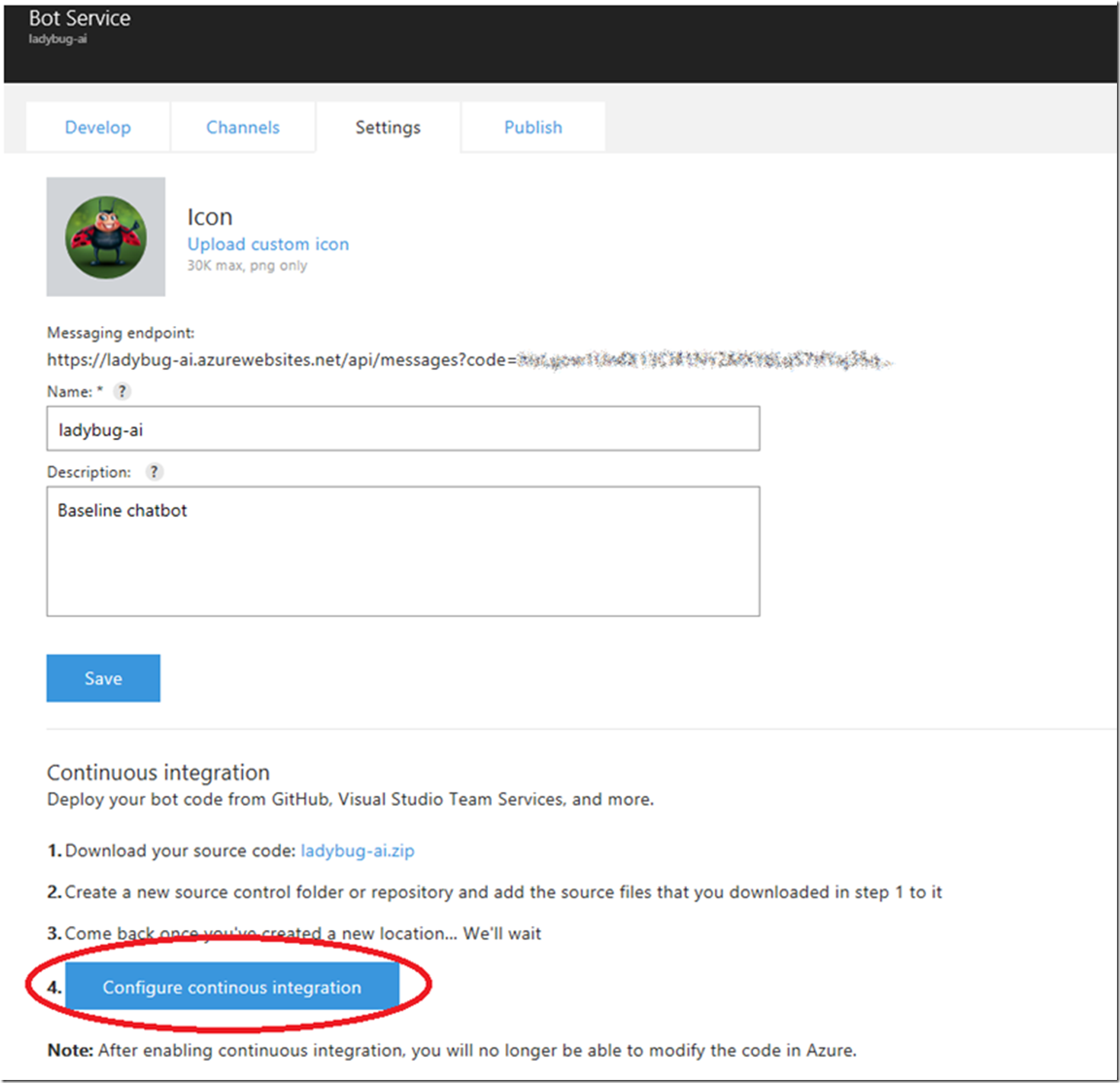 Then, I selected OneDrive and provided the required settings, similar to that shown in Figure 2.

Once configured hit the Sync button. I had the OneDrive in my Windows Explorer and once it synced it did not show in Windows Explorer, but when I went to OneDrive.com and logged in I did see it there. I simply needed to right-click on my OneDrive mapping in Windows Explorer and select the folder for syncing, then all was good. In the instructions here where it says to download a local copy of the source, at this point I am not sure what I need to do with that source code, but will keep it on my VM until I see the reason, maybe it comes later. 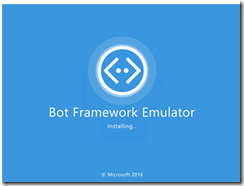 Once the installation was completed, the image shown in Figure 4 was rendered.

There is an error mentioning NGROK, but I have not yet completed all the installations so I will ignore that for now. I do recall NGROK from when I was troubleshooting a Bot, using the Bot Framework, but that was when the Bot Framework was hosted on an Azure App Services Web App and not the Azure Bot Services. The article I documented that is here, ‘Bot Framework 405 Method Not Allowed, 401 Unauthorized and 500, Internal Server Error getting started’. I closed down the Bot Framework Emulator that I just installed and moved on to the remaining components.

Before installing the Azure Functions CLI, you will need NPM, NPM is a command-line tool that is bundled with Node.js, I downloaded it from here, Node.js contains NPM. I downloaded 64-bit, Windows Installer (.msi) version of LTS v6.9.1, similar to that shown in Figure 5. 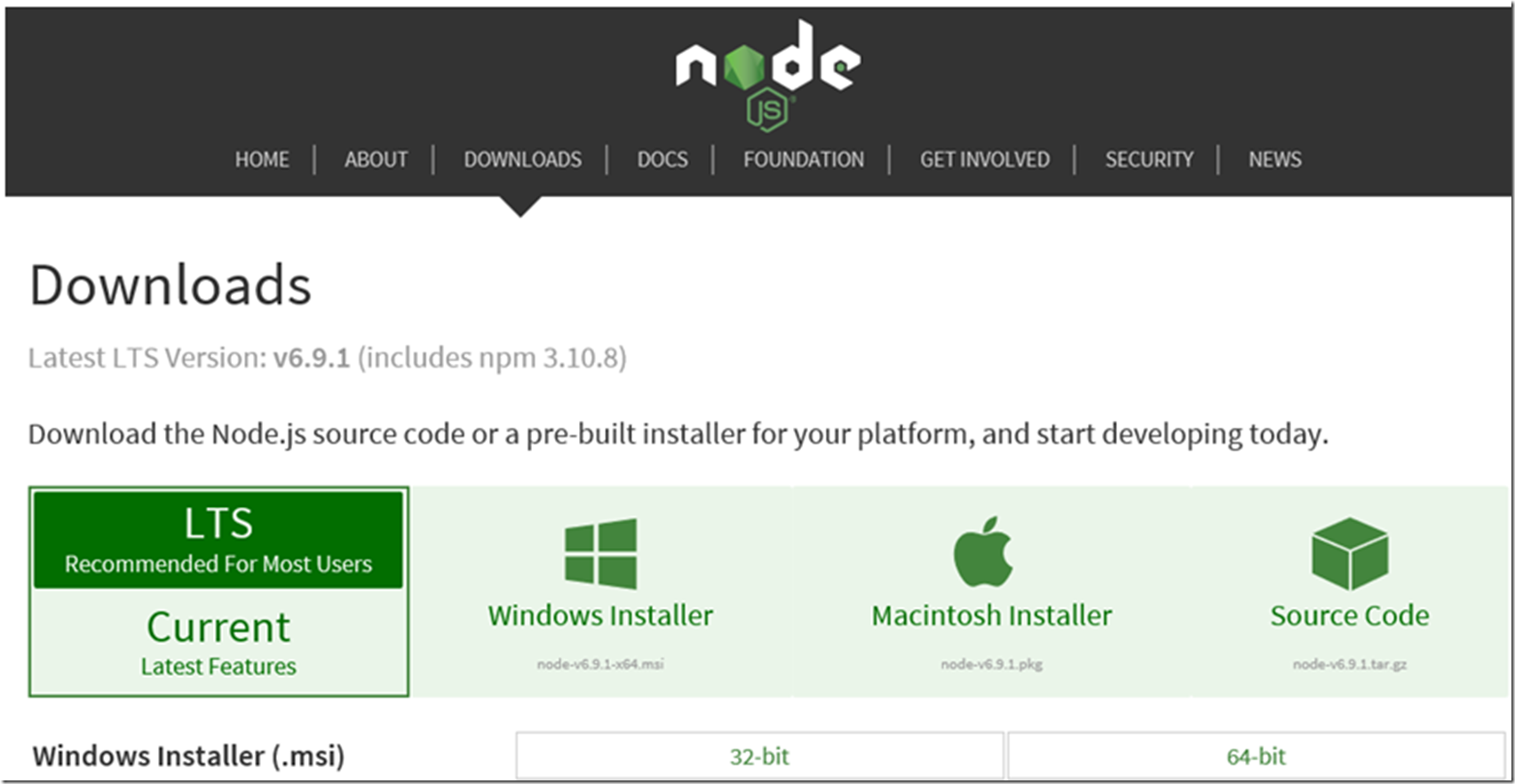 Figure 5, installing node.js and NPM for installing and configuring a debug environment for Bot Services

I accepting all of the defaults and installed node.js as shown in Figure 6. 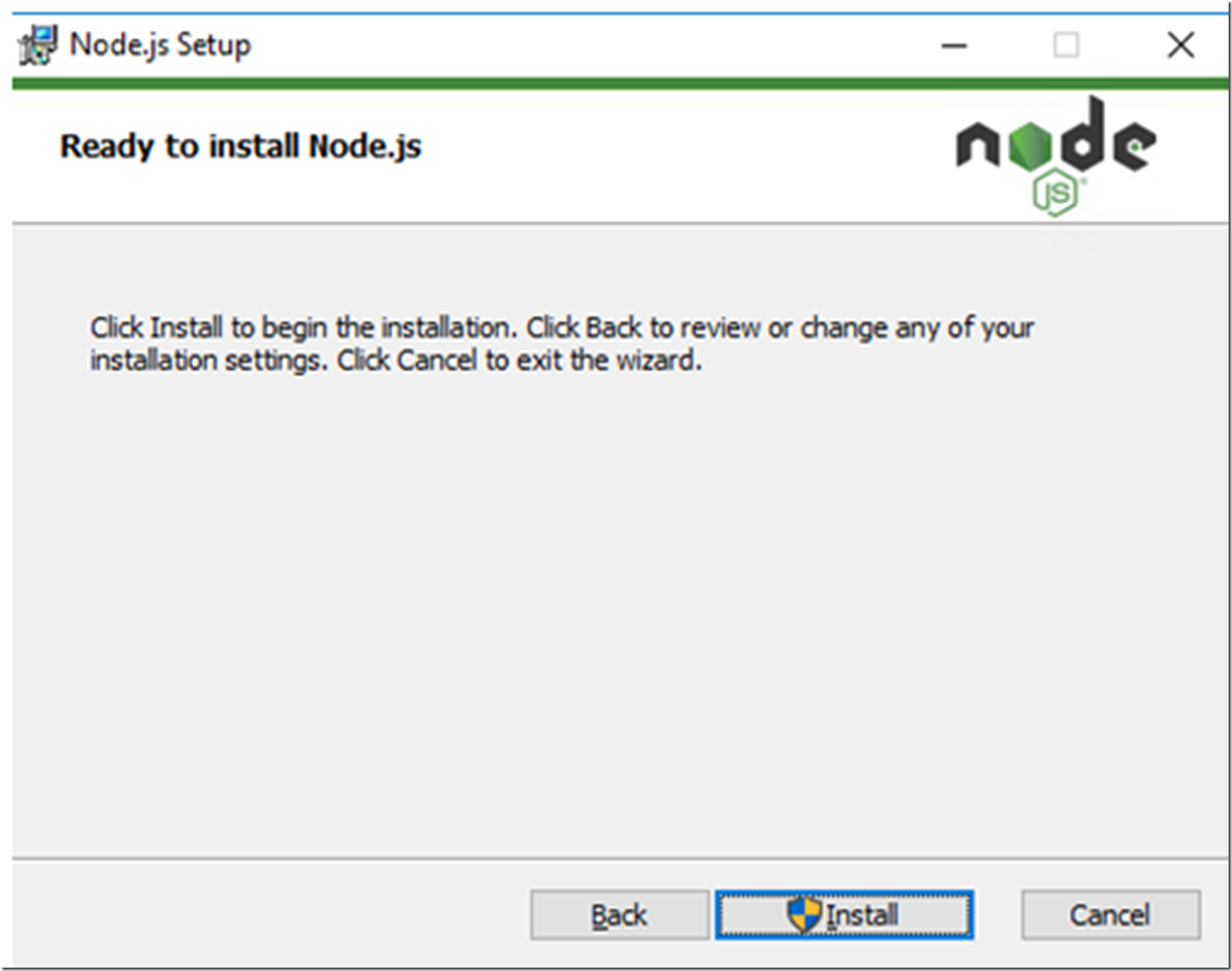 Figure 6, install node.js to get NPM for azure-functions.cli installation

Information about Azure Functions CLI can be seen here. Navigate to directory where you installed node.js and execute this command, also shown in Figure 7:

Once complete, you should, at least I saw the following result, Figure 8, glad to see ‘Everything looks all right’ in green. 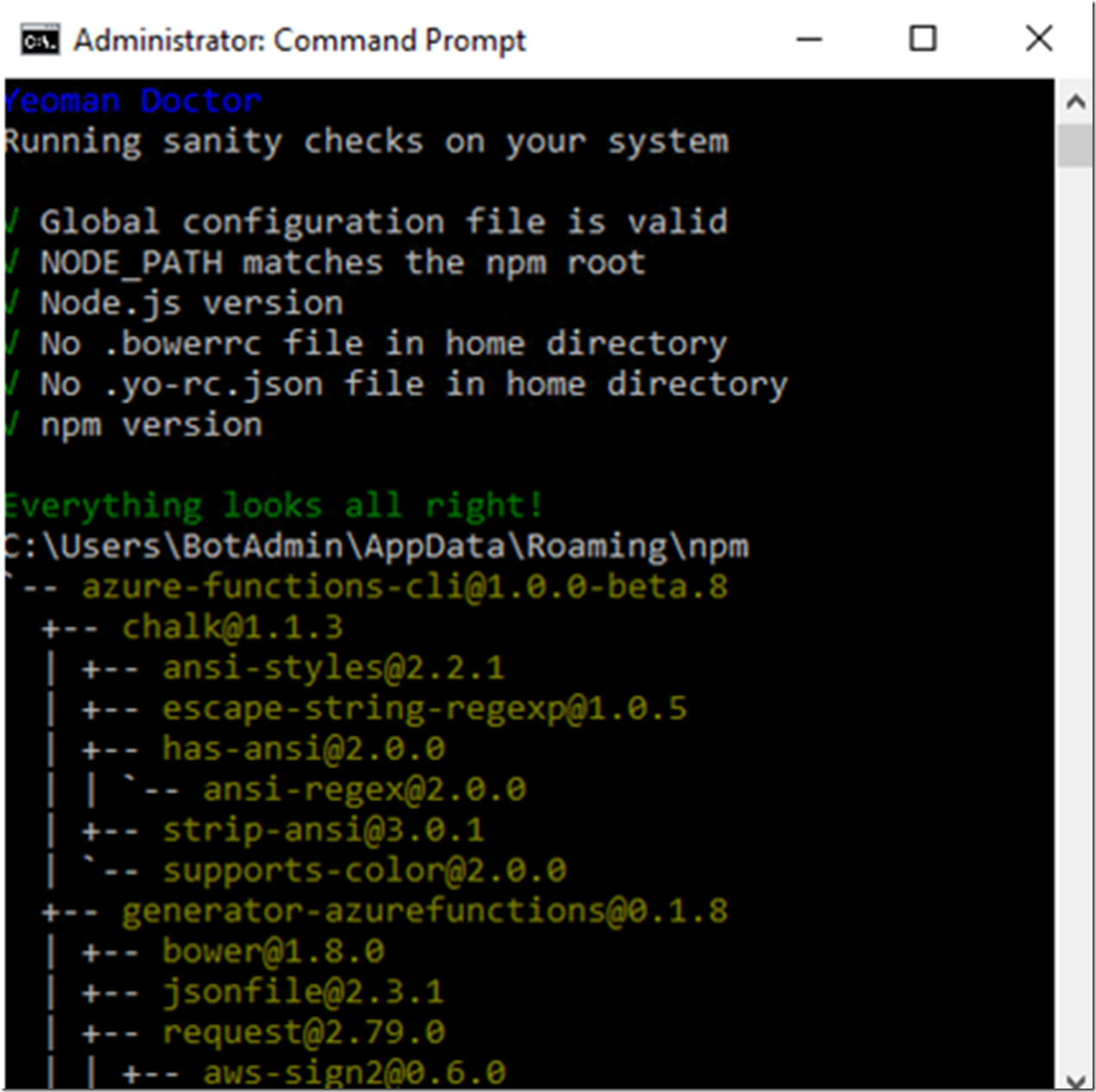 Figure 8, successful installation of azure-functions-cli for debugging a chatbot

I exited out of the CMD prompt and went onto install the last component.

Figure 9, the .NET Core CLI for debugging a #chatbot 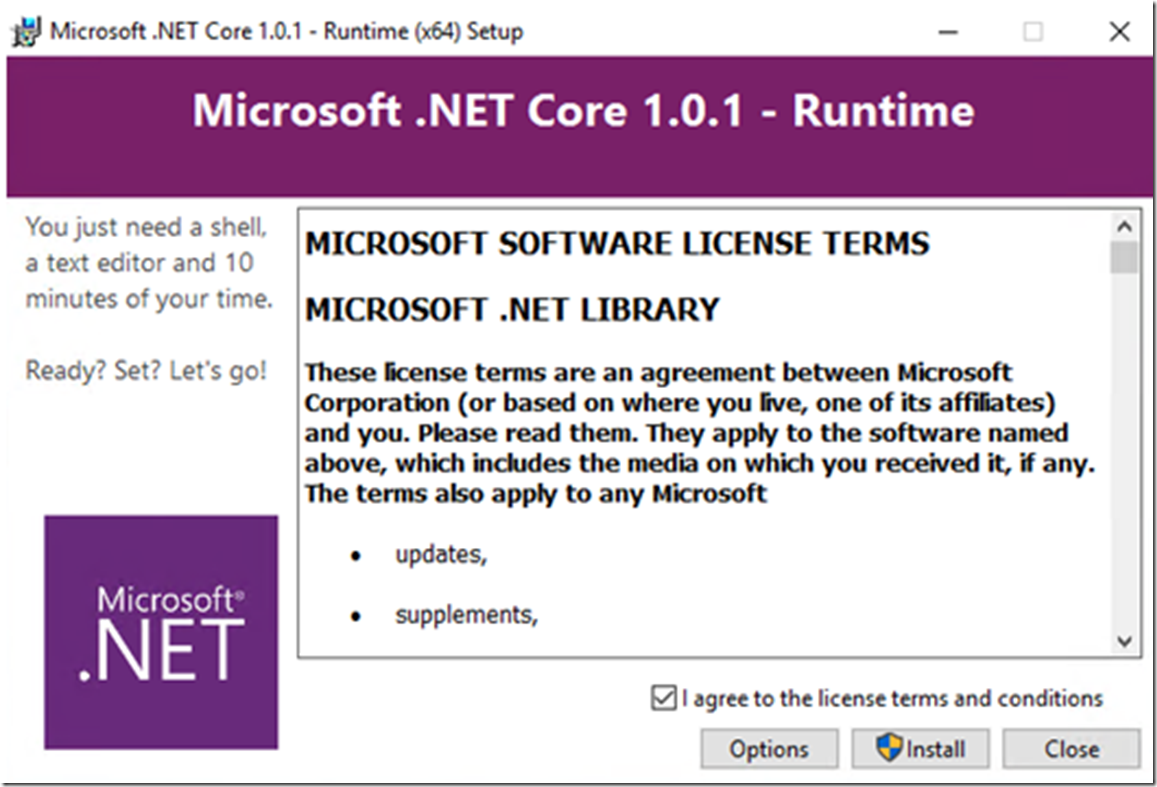 One more component to go and that’s it.

Install the extension by selecting Tools –> Extensions and Updates. Then search Online for ‘Command Task Runner’ and download the extension. You should see something similar to that in Figure 11. 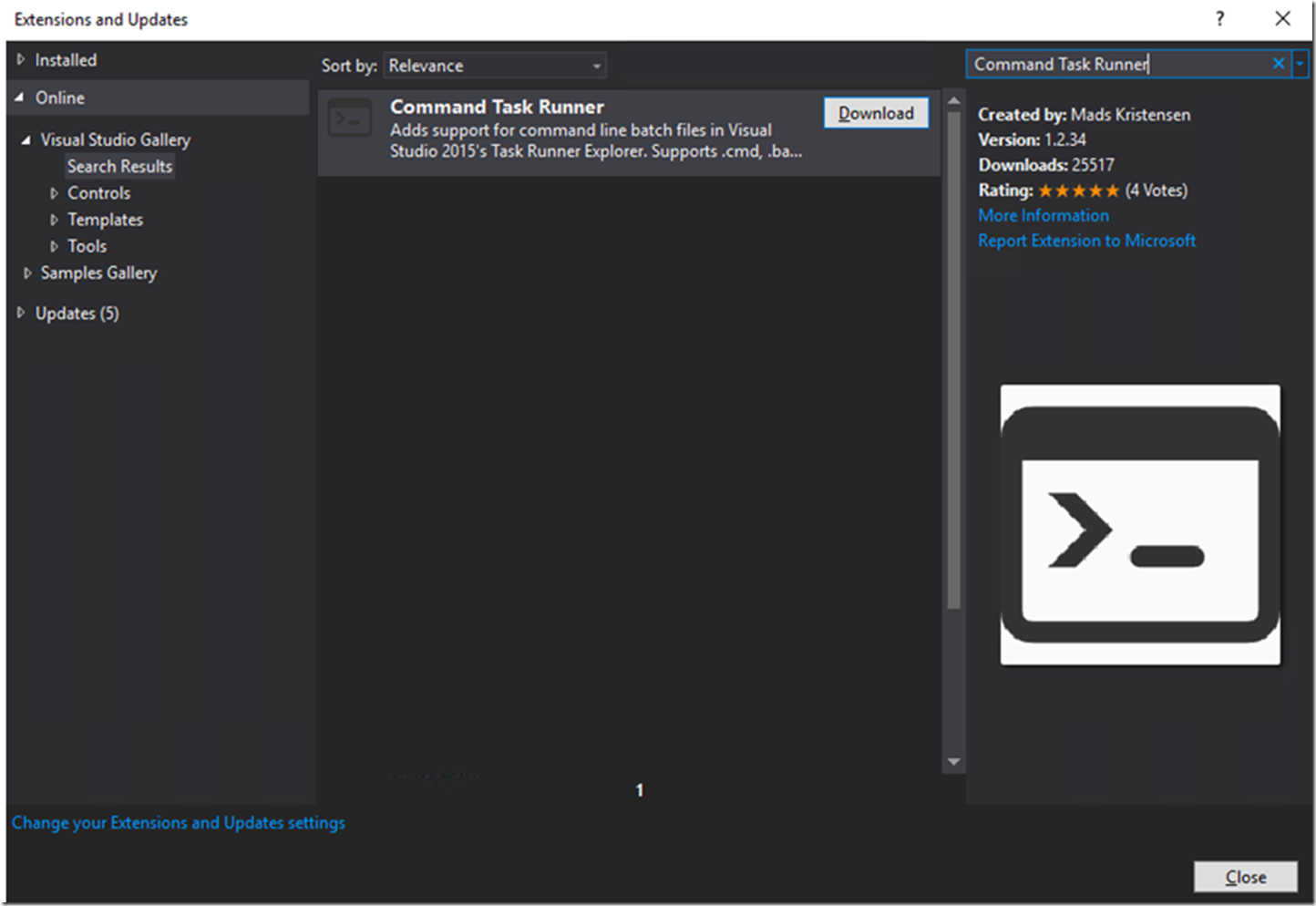 Figure 11, download and install the command task runner extension for troubleshooting the #chatbot hosted on Azure

Restart Visual Studio after the installation and let’s get ready to rock! Now that all the components required to debug the #chatbot, let’s start debugging.

To get all the references setup so that the code can be run you need to execute this command also shown in Figure 12:

You need to download bf-dotnetpreview3-debug-csproj.zip and put the messages file into the messages folder. You can download it from here, search for ‘csproj’. 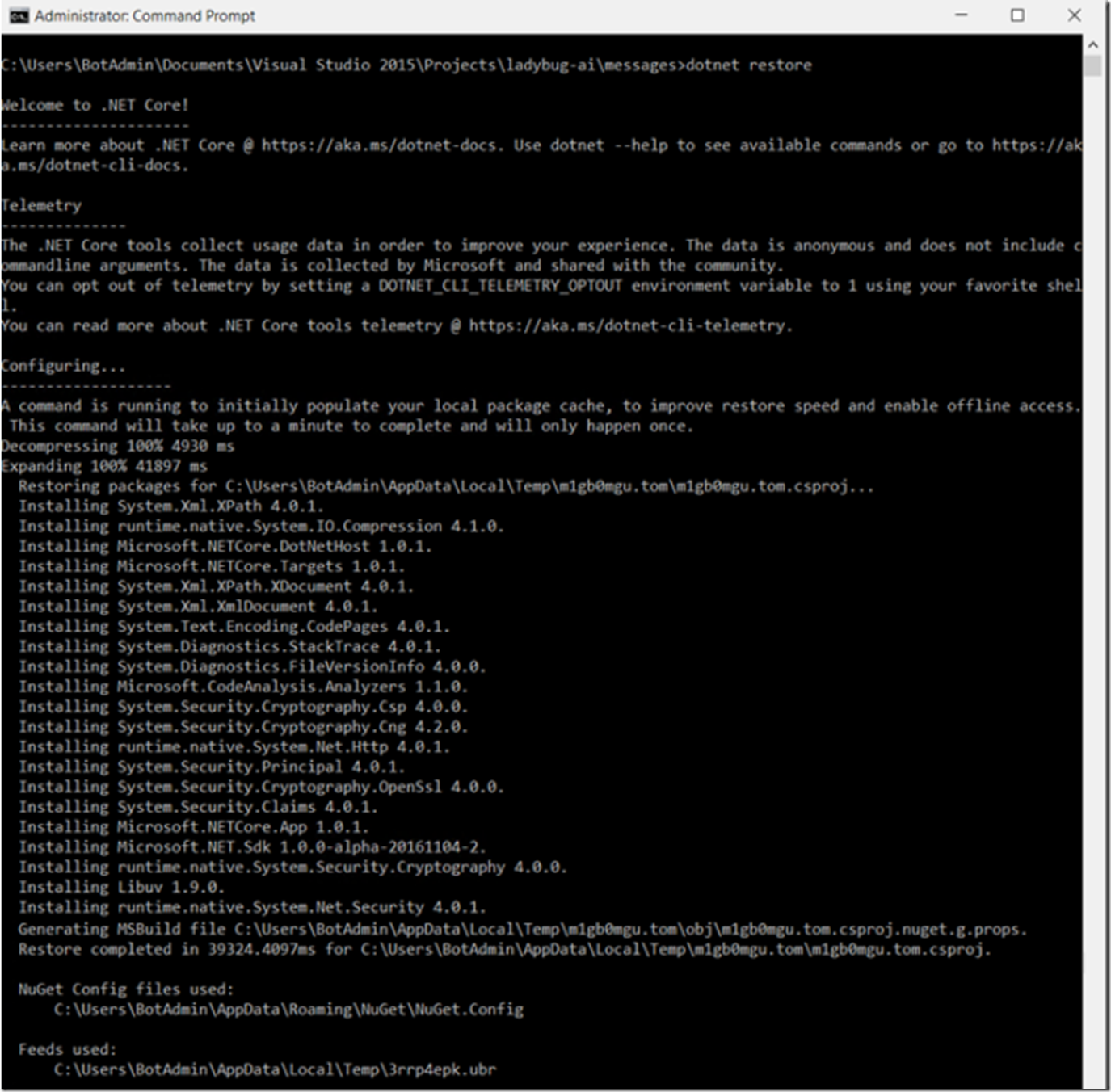 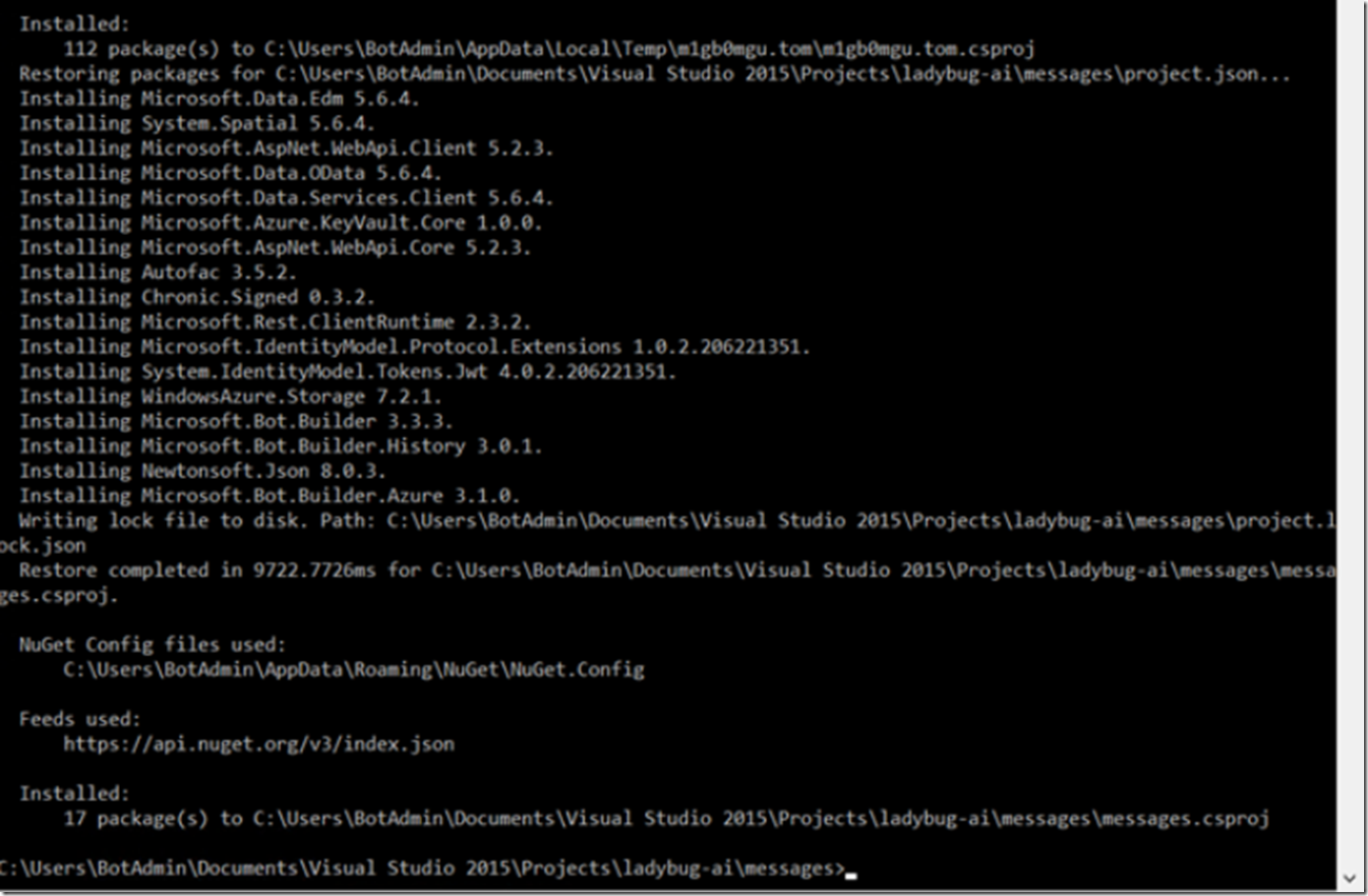 Figure 12, run dotnet restore to install the binaries required to debug the #chatbot 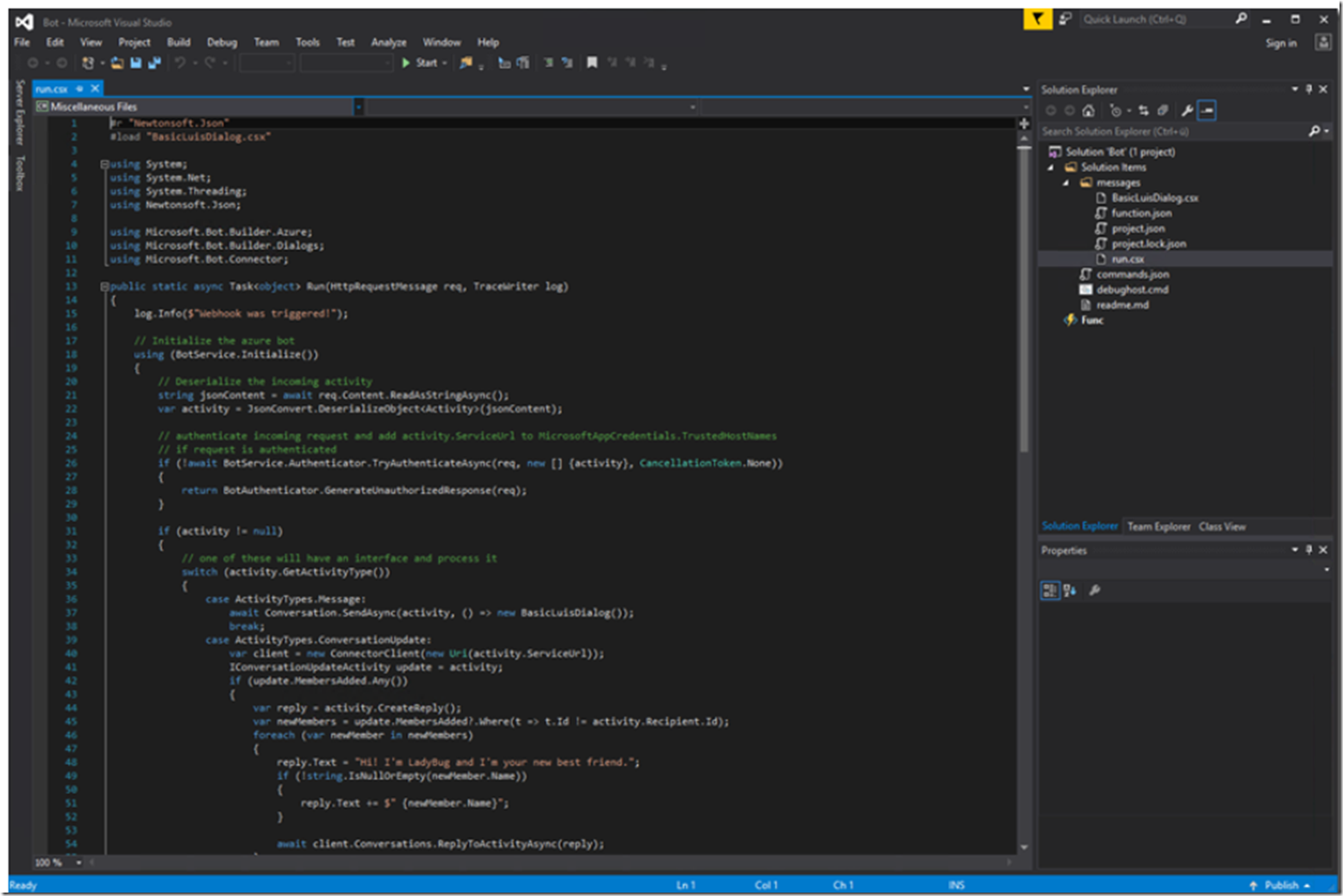 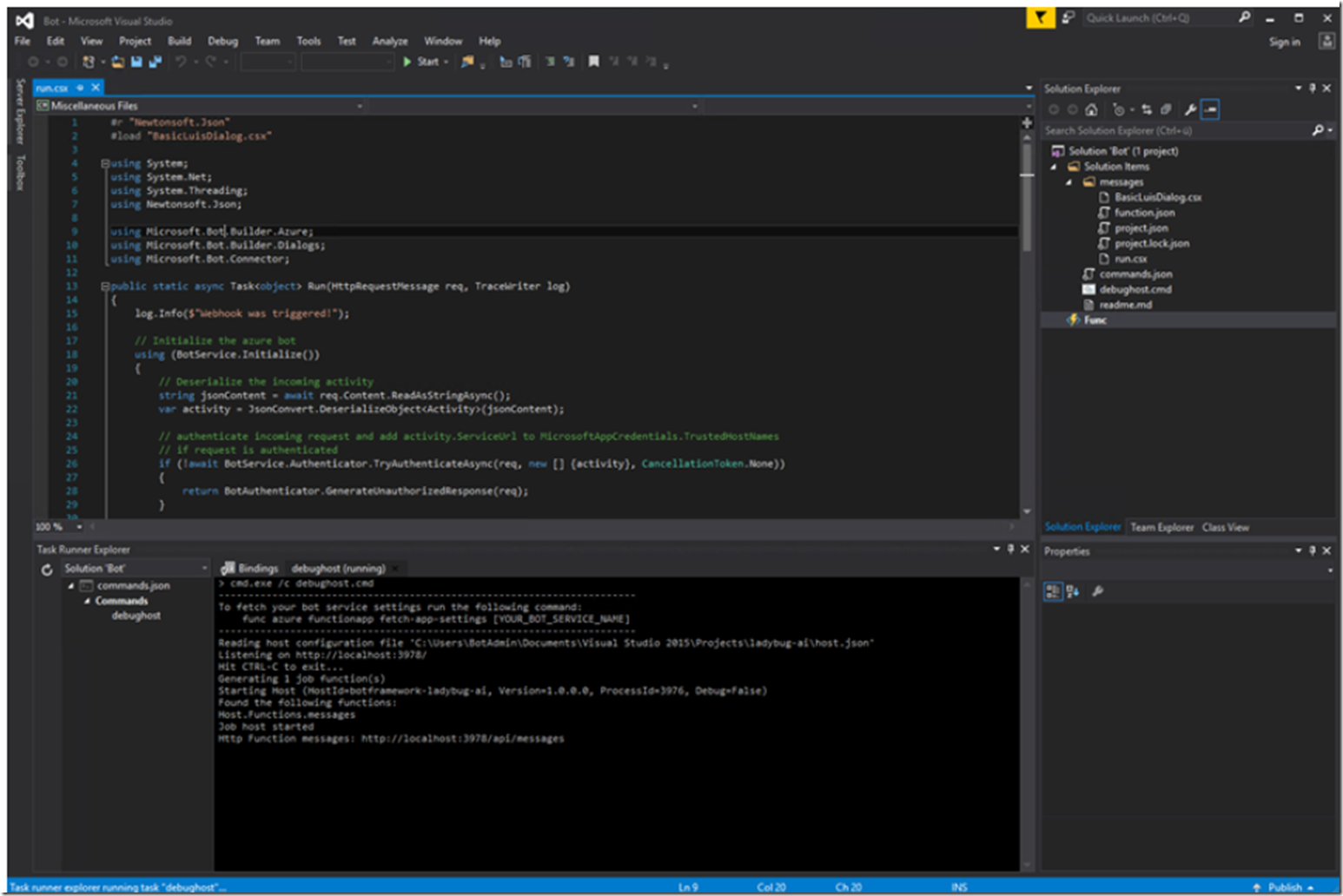 Next, start the Bot Framework Emulator, note the last line in the Task Runner Explorer that identifies host and port it is listening to. As you do not need security for local debugging, leave the Microsoft App ID and the Microsoft App Password blank. Click on the CONNECT button and you will see the responses in the task runner explorer.

After pressing the connect button, you can then chat with the development instance of the Bot Service as shown in Figure 16. 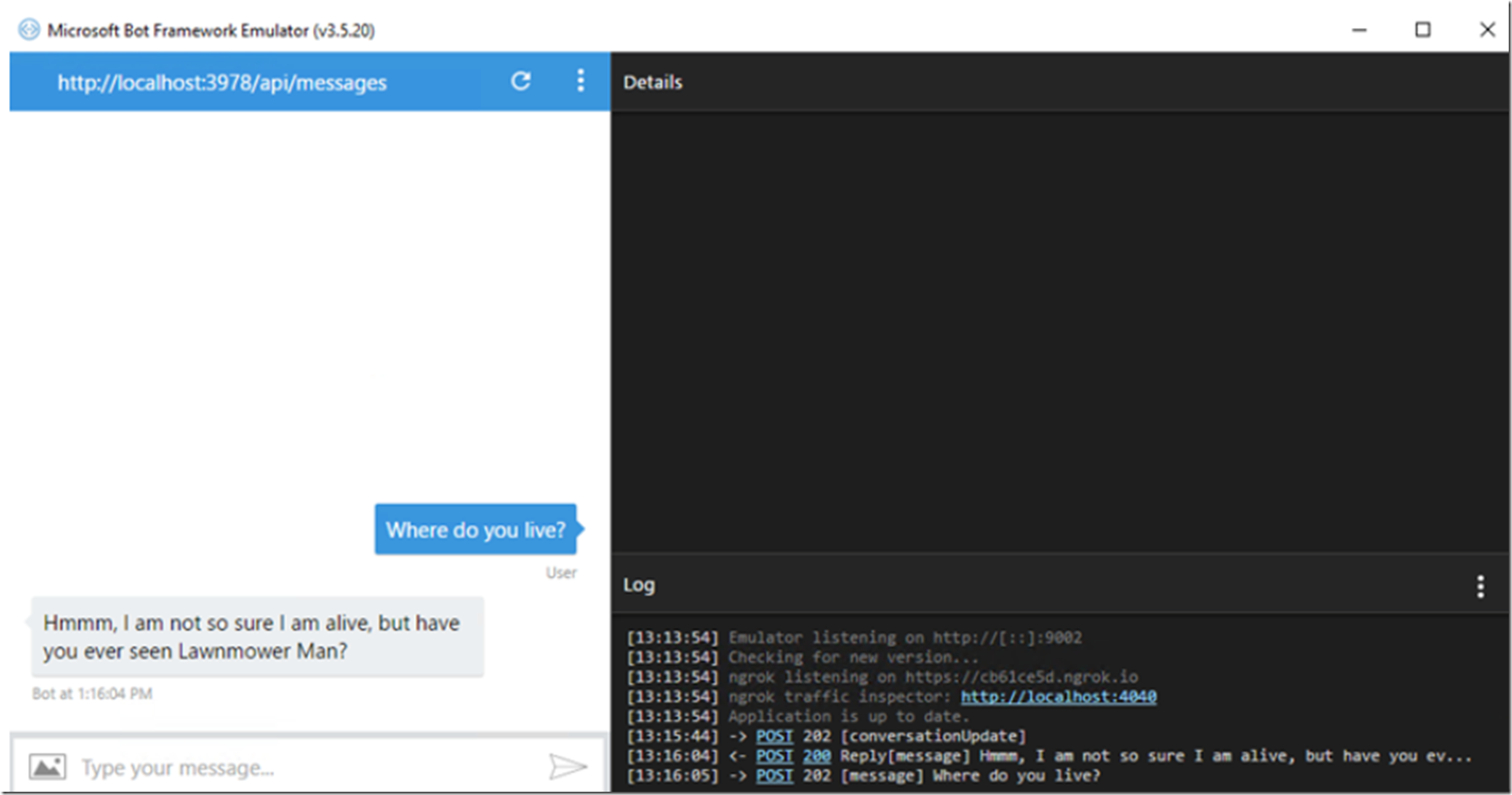 Figure 16, chatting with a #chatbot using an Azure Bot Service in a development environment

To setup breakpoints, you need to press the Start button from within Visual Studio, you set the breakpoints, same as you would when debugging any C# source code. Then you can look at the results and figure out how to reference them and make a super cool #chatbot. Check out the last figure of this awesome article, Figure 17. At least it was awesome once upon a time Smile 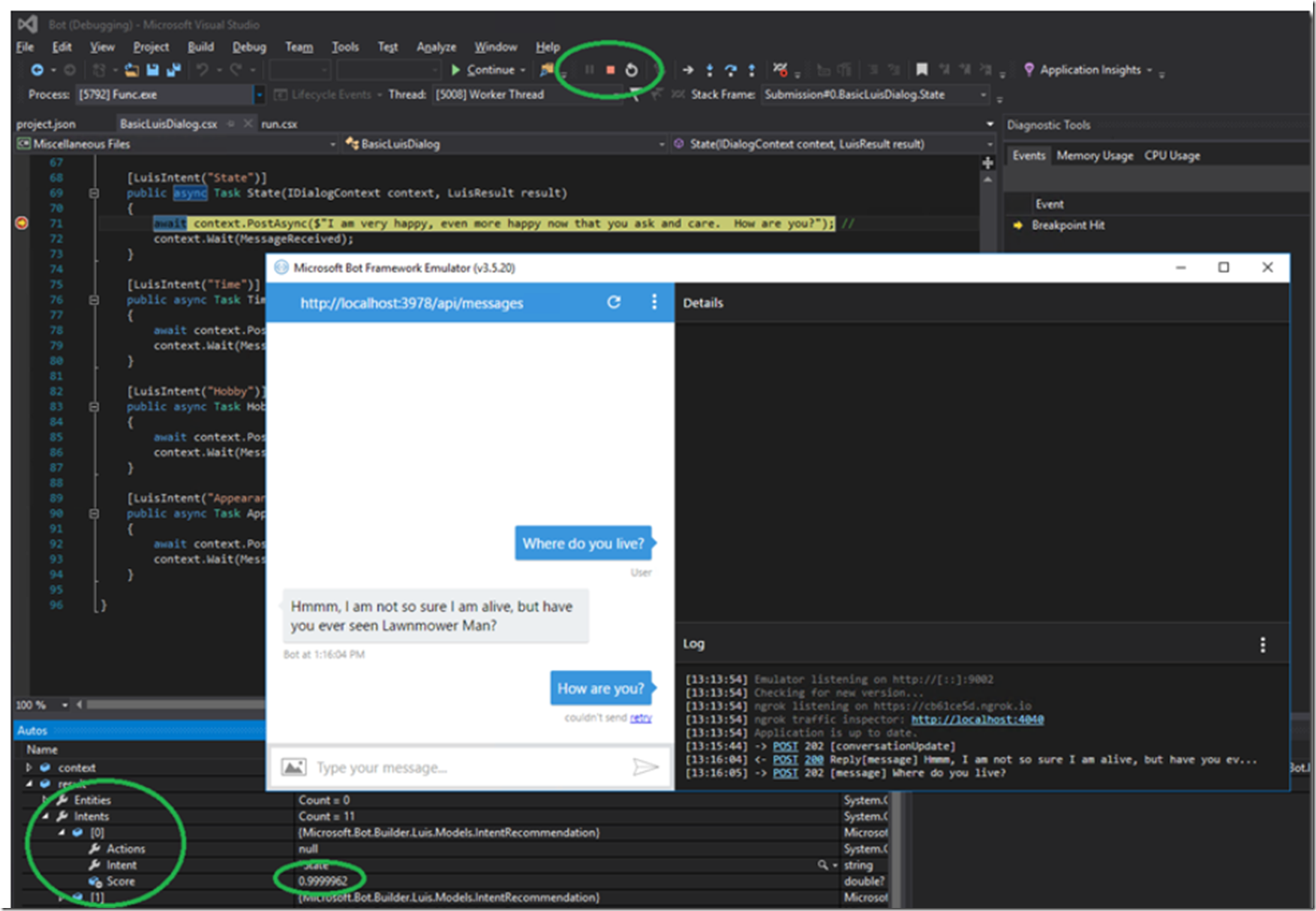 It’s time to rock! Wait I need to mention NGROK…

Recall from Figure 4 where there was an error message mentioning that NGROK was no configured successfully. Then you see in Figure 15 and Figure 16 that the message is no longer there.

I resolved that by installing NGROK as described here. I ran this command and is represented in Figure 18, ok…Figure 17 was not actually the last figure, sorry… 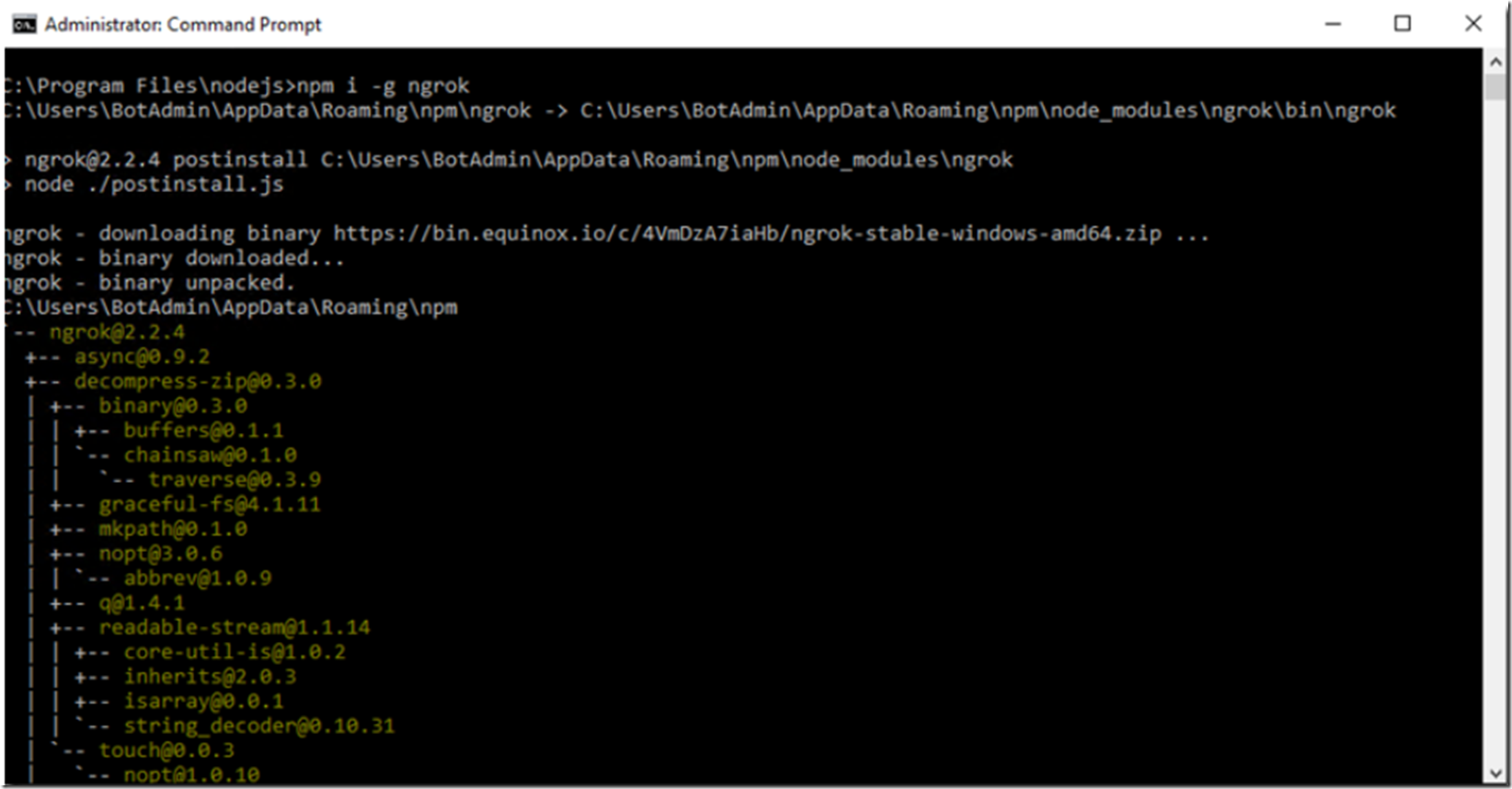 Figure 18, install NGROK for use with an Azure Bot Service #chatbot

There was no other configuration required to make the error go away, it just worked, awesome. I did restart Visual Studio and the Bot Framework Emulator, however.