The code can be downloaded from here or on GitHub.

I wrote this post here where I discussed how I configured Azure Active Directory into one of my Azure App Service Web Apps. One of the main differences between that post and what I am trying to do here was realized when I received this exception:

AADSTS90014: The request body must contain the following parameter: ‘client_secret or client_assertion’.

Here are the steps I took to get my console application using an HttpClient to call a Web API hosted on the Azure platform as an App Service Web App:

Sweet success! This wasn’t easy, but should it be? This was a real challenge for me, it took a lot of time and trail to get it to work and I wasn’t able to find an end-to-end set of instructions for getting it to work, maybe because this is still in PREVIEW so it has and likely will change…let’s get started.

Check out my other post on a similar subject: How (I) configured Azure Active Directory into my ASP.NET MVC OWIN web application

Create the Web API and publish it to the Web App

I created a simple Web API using Visual Studio 2015 as seen in Figure 1. 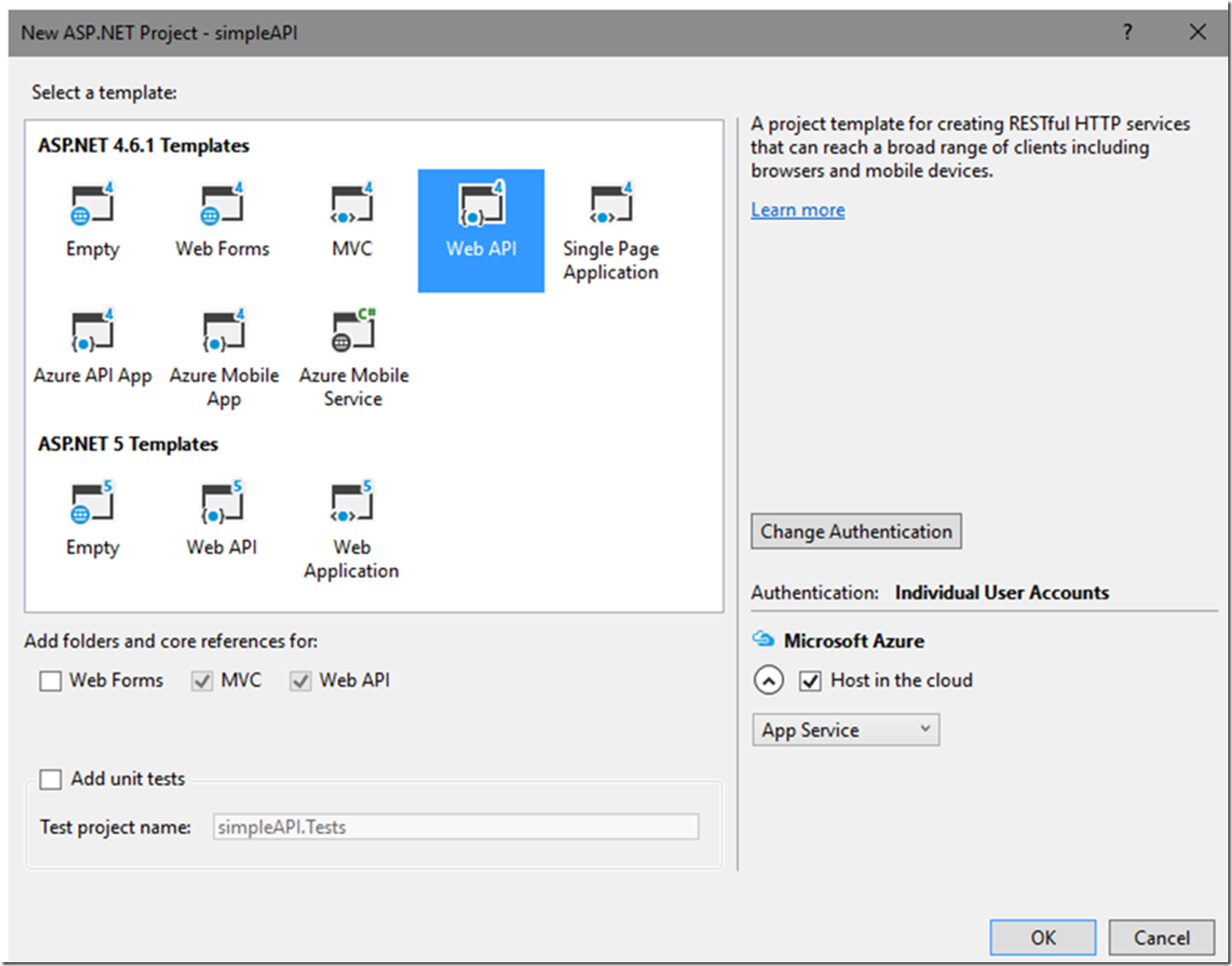 I added a controller named MgmtController.cs with a method called GetMgmt(string id, string value) that simply returns the DateTime and the parameters that are sent to it. See code snippet 1 that shows the code.

Next I created a console application, as shown in Figure 2. 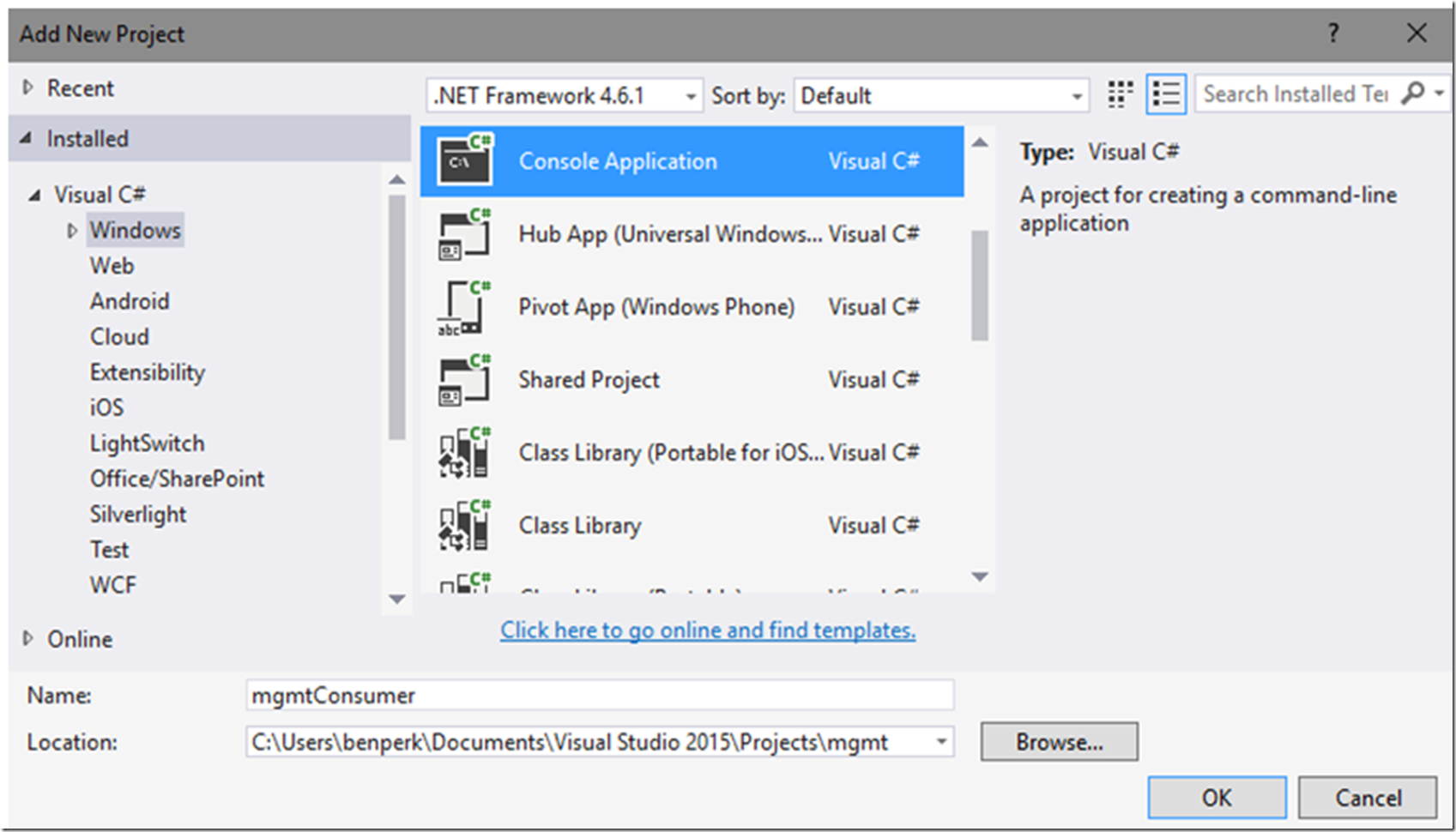 The code that called the Web API is shown in code snippet 2.

Running the code I get the output shown in Figure 3.

Figure 3, calling a Web API hosted on an Azure Web App from a console application

So, from the beginning, I published the App Service Web App to a the platform, it is called ‘mgmt’. I logged into the Azure Management portal here and and navigated to the Web App. Then I clicked on the Authentication / Authorization settings link which opened the Authentication / Authorization blade. By default it is Off, so click the On button, since I wanted to enable Azure Active Directory, I selected it from the drop-down, then I click on Azure Active Directory from the list of Authentication Providers which opened the blade I referred to initially ‘Azure Active Directory Settings. Click on Express, unless you want to do some Advanced stuff, leave the Create New Ad App selected and give the App an name, in my case ‘mgmtADApp’. Like mentioned originally, this creates a CONFIDENTIAL application.

Click OK, then Save the configuration. You can then navigate to the Azure Active Directory feature in the Azure Management Portal here and see that the App is registered and has an application type equal to Web App / API. As seen in Figure 5.

What I did next was access the Web App using a browser, just to make sure that I could, indeed login and it was successful. As I was already logged into the Azure Management portal with the identity that is allowed AAD access to my Web App, I was not prompted to provide my credentials. I noticed during the login that I get redirected, authenticated and redirected back to the my site. I copied the URL while it was waiting on the authentication and found some valuable information within it.

The above 4 bullet points are the values you need to create an instance of Microsoft.IdentityModel.Clients.ActiveDirectory.AuthenticationContext, and those were not easy nor simple to find….I found out…

Before we get to the solution, I want to share some exceptions I worked through.

Figure 6, The page cannot be displayed because an internal server error has occurred

After finally figuring out that I needed a PUBLIC NATIVE CLIENT APPLICATION I got a 401.71, IIS status 401 sub status 71, HTTP Status Code: ‘Unauthorized’, HTTP Response: ‘StatusCode: 401, ReasonPhrase: ‘Unauthorized’. I saw the 401 in the output of my console application, as shown in Figure 7, but I, like so often, the real detail comes with the sub status code which I found be enabling Failed Request Tracing, Figure 8 and reviewing the XML file, Figure 9.

Figure 7, received a 401.71 IIS unauthorized HTTP response from my Azure Active Directory Application running in an App Service from a client 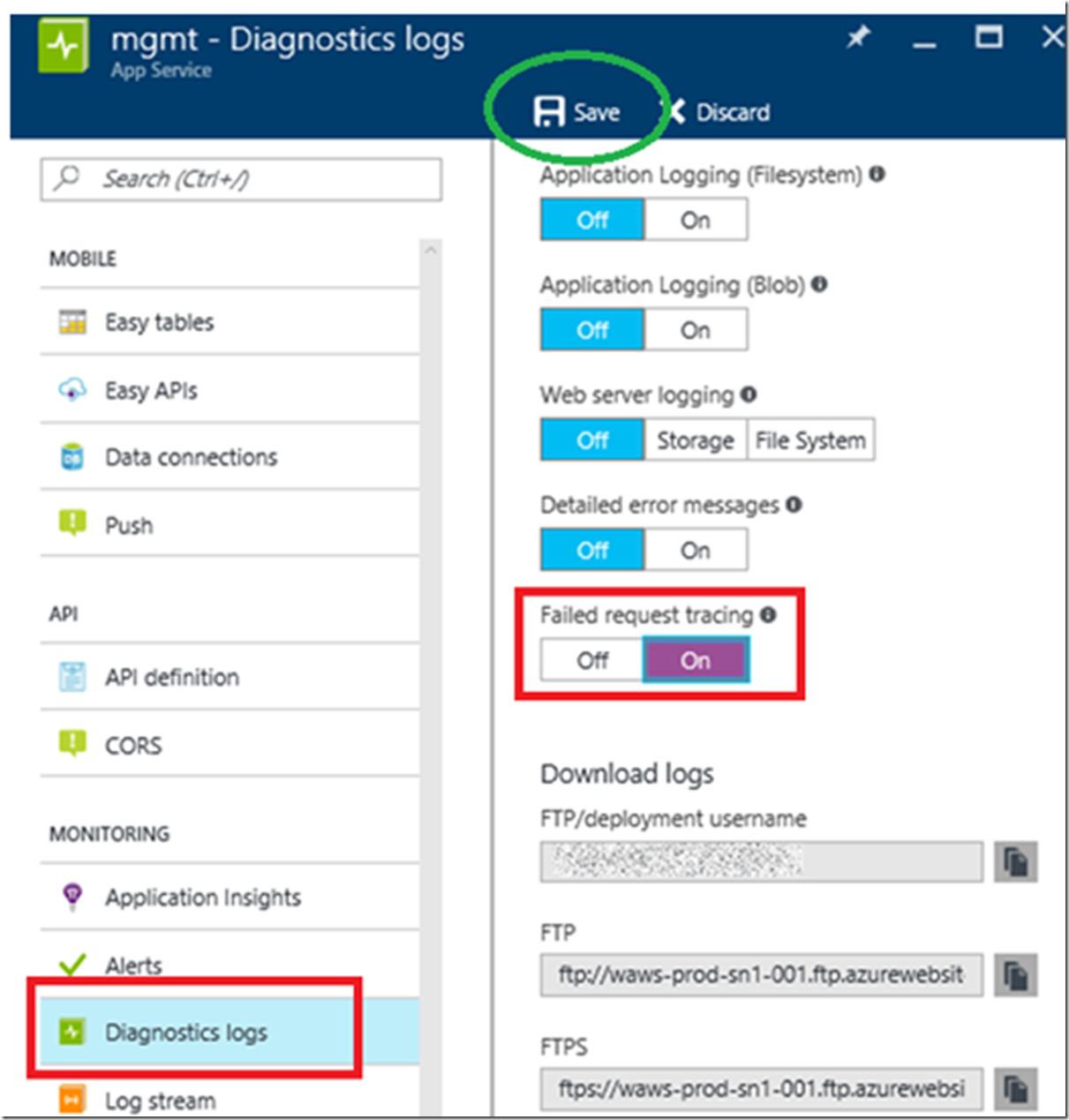 Finding the sub status code took me further as there were some other articles with tips and thoughts about why it was happening and how to resolve. None provided the complete solution, but they moved me forward.

Figure 9, FREB trace with the 401.71 issue when calling an AAD application from a console application

So, finally, here are the steps I took to code the console application that calls a Web API hosted on Azure as an App Service Web App protected by Azure Active Directory: 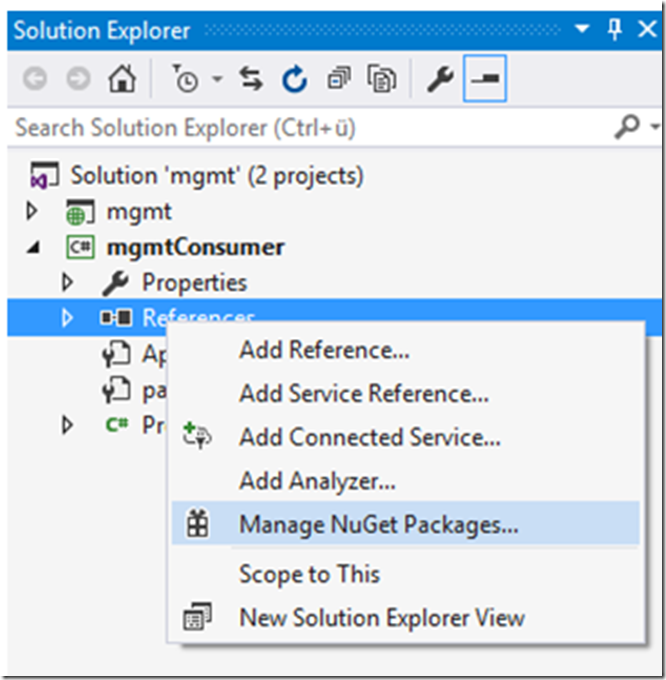 Figure 10, add a NuGet Package library to a console application in Visual Studio

Search for Microsoft.IdentityModel.Clients.ActiveDirectory and install it, you should find something similar to Figure 11.

Write the code find out the values for AUTHORITY, RESOURCE, CLIENTID, REDIRECTURI and PARAMETERS

The code in Code Snippet 3 is how I called the API.

Navigate to Figure 12 by selecting the Azure Active Directory feature then click the App Registrations then Endpoints. 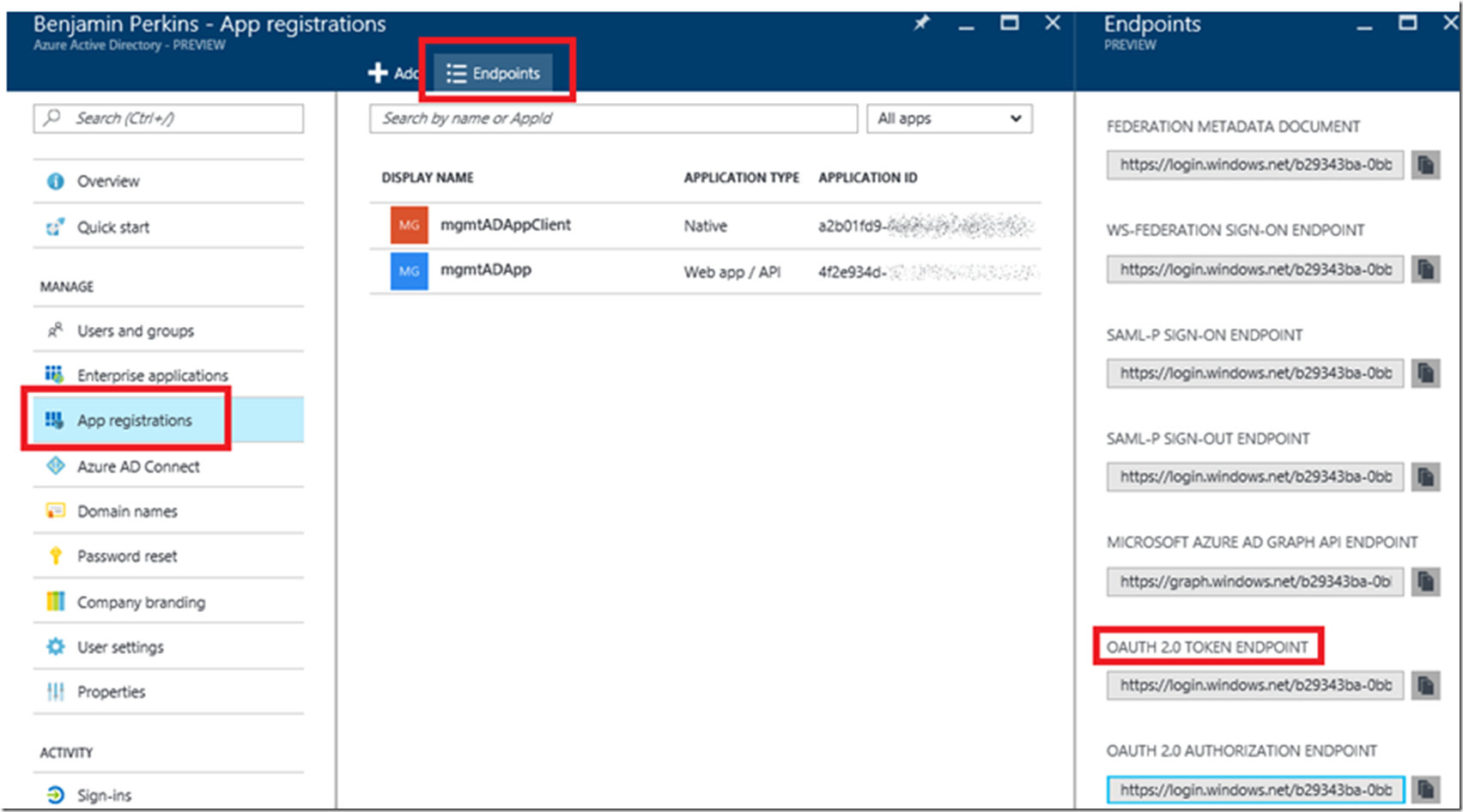 I read through this book “Modern authentication with Azure Active Directory for Web applications” by Vittorio Bertocci which does a super job at describing the Endpoint types:

Create a Native Client Application in my Azure Active Directory

The instructions are pretty straight forward here, so won’t go too deep. Focus on the section “(Optional) Configure a native client application”.

Notice also after clicking on the APPLICATIONS link that the mgmtADApp which was created in Figure 4 is present.

Click the ADD+ button at the bottom of the page similar to that in Figure 14.

Then follow the wizard that which consists of 3 pages, Figure 15, Figure 16 and Figure 17.

Figure 15, Add an application my organization is developing 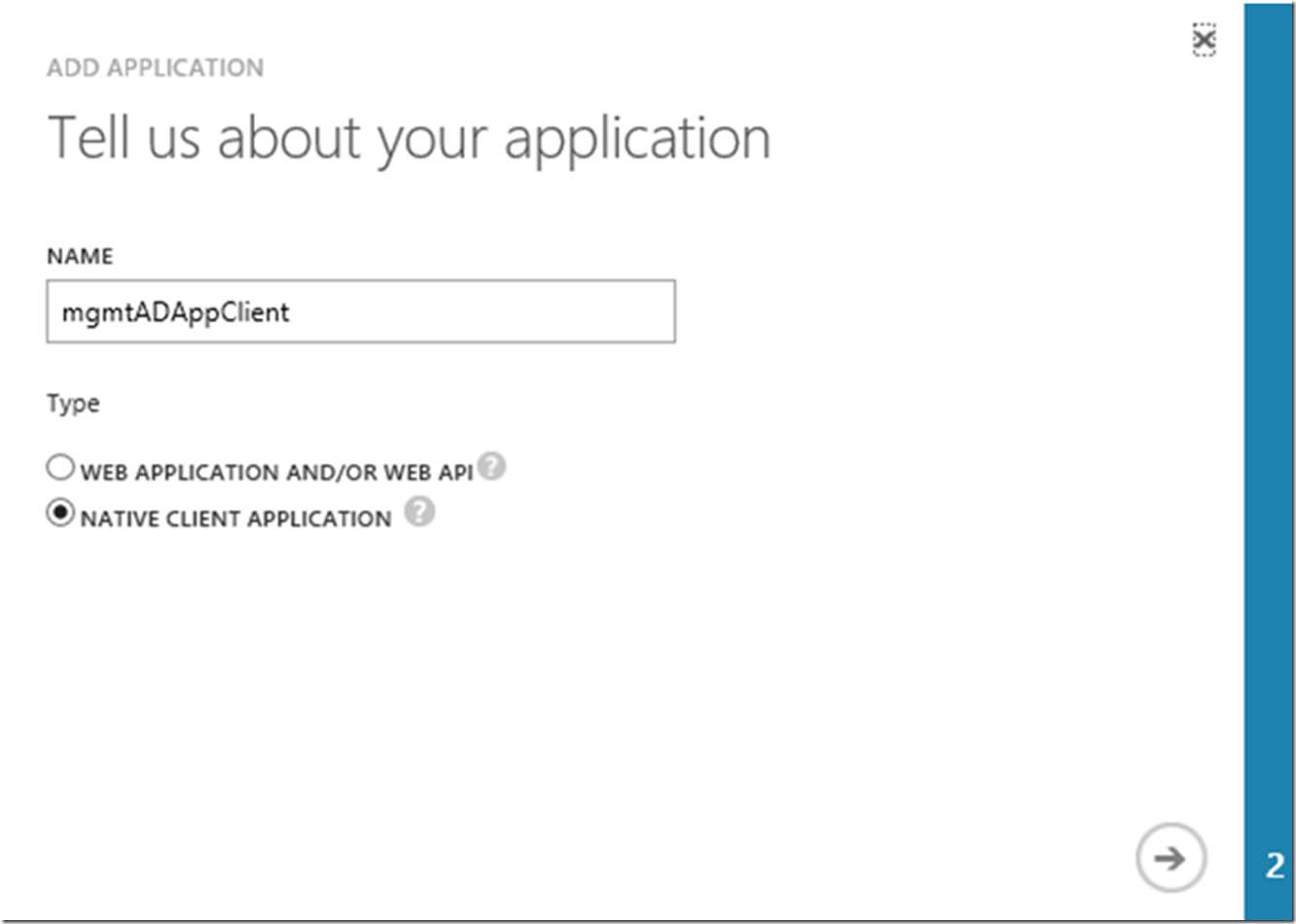 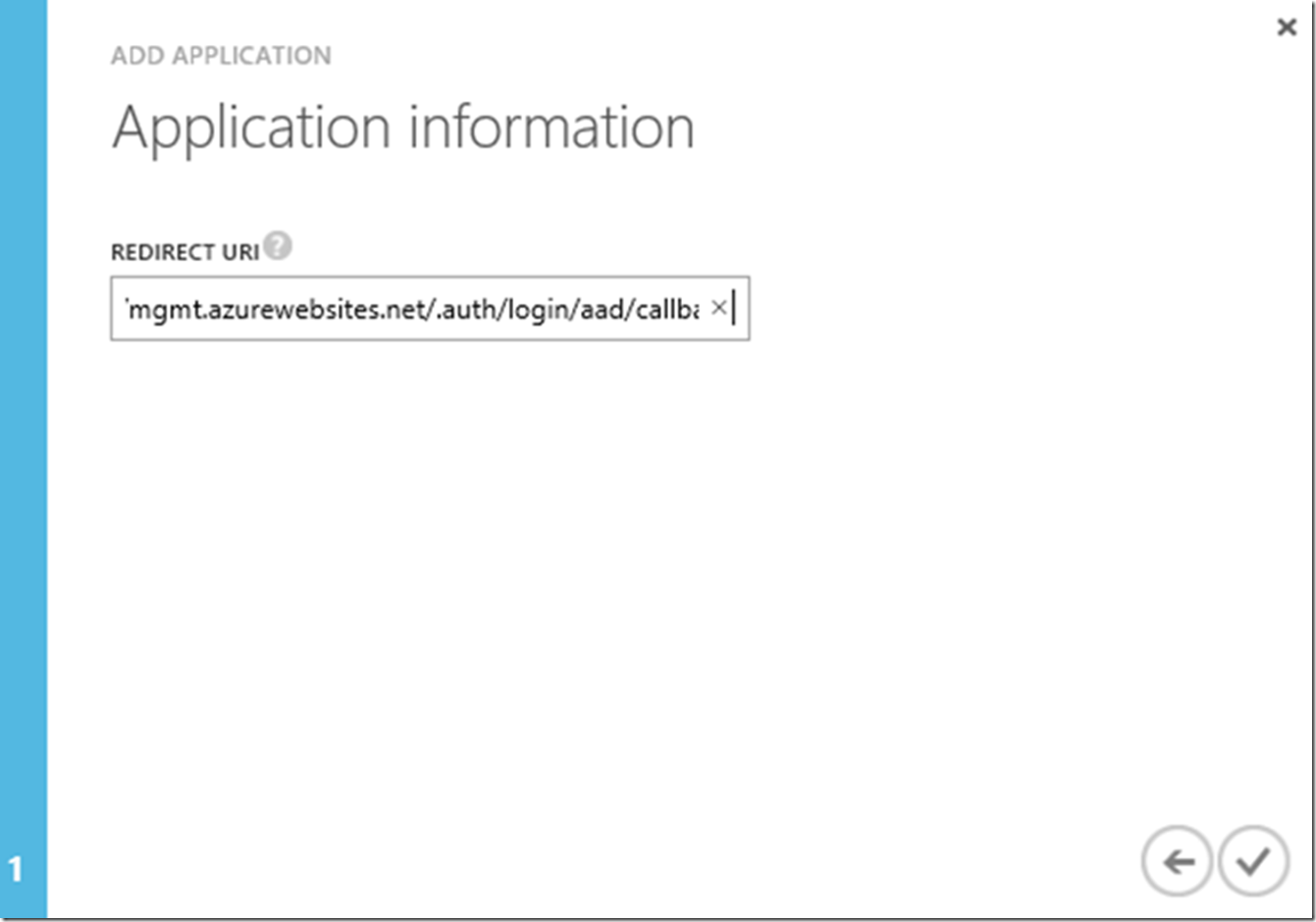 This is the setting I reference to earlier in point 4 of the Write the code section, this value and the one in the code need to match 100%.

Once created, you can look in the new and AUX portal to see the mgmtADAppClient, like in Figure 12.

Figure 18, X when adding a permission to an Azure Active Directory Application

I would expect the X shown in Figure 18 because I wouldn’t want, need to grant a permission to itself.

Figure 19, the X when adding a permission to an Azure Active Directory Application is gone

Then, back on the CONFIGURE page for my mgmgADAppClient application I need to grant the Access mgmtAdApp to this NATIVE PUBLIC Azure Active Directory application, shown in Figure 20. Save the configuration, notice the CLIENT ID use it in the code.

You can also see the permissions in the new portal, as shown in Figure 21.

I love this stuff, the satisfaction I get when it works is …..