I wrote these other articles here “How to add Docker support to your ASP.NET Core application” and here “Publish a Docker Windows image to Docker Hub using Visual Studio” that discussed how I got to this point.  So far, not many problems and it went pretty smooth.  When I added Docker support to my ASP.NET Core project it added a Docker file that identified the OS version I would be including with the application.  It included this by default:

Then when I accessed the Azure portal I selected the Windows OS for the Web App for Containers blade and when I added the image it did not validate.  I received the following, Figure 1:

I looked around here and here for some images and through trial and error I found one that worked, Figure 2.

Unfortunately, the container did not start and I received the following response, ASOD (Azure Screen Of Death)(*), when I accessed the site, Figure 3. 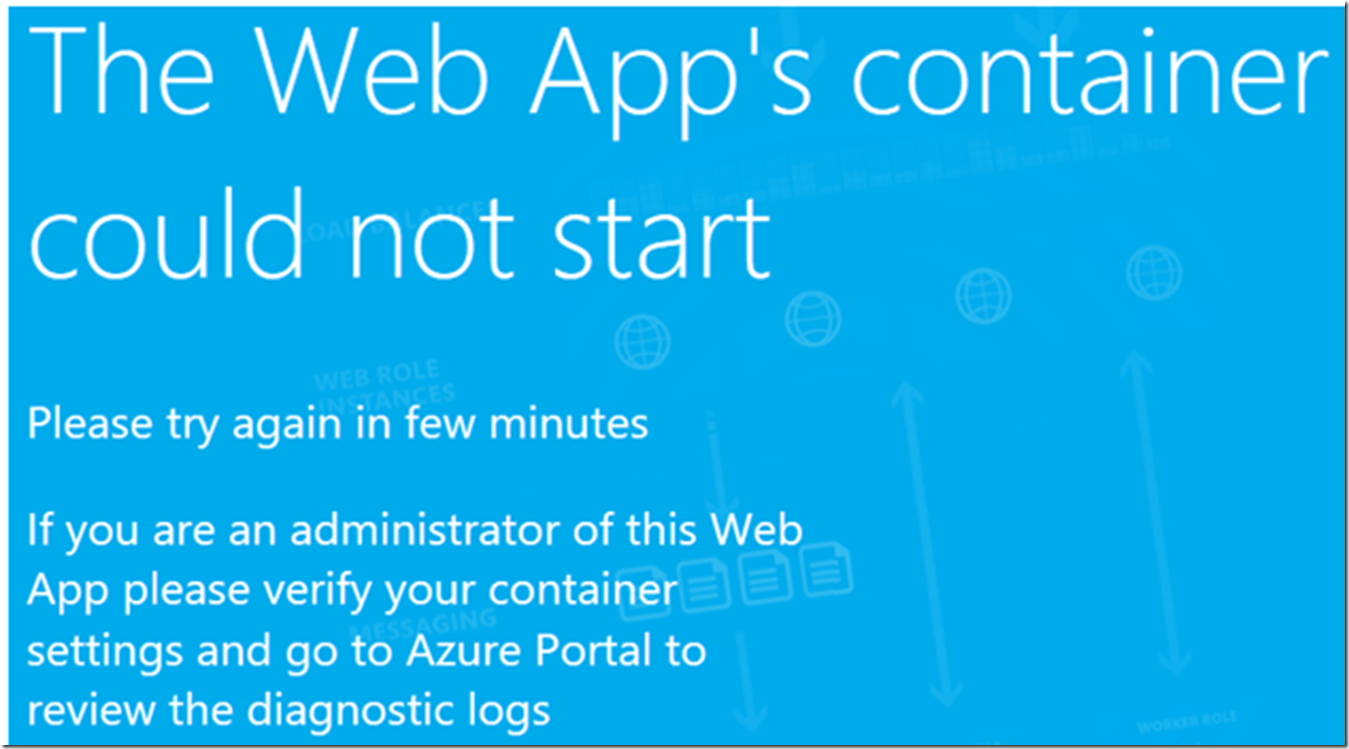 To resolve that issue, I did what the message stated, I.e. enable and review the diagnostic logs.  Here is what I found in the D:\home\LogFiles\*_docker.log files via KUDU/SCM.

I didn’t take any action other than to be patient, looking through the logs the process is downloading a large number of large files, so it can take some time to get everything loaded, installed and configured.  Ultimately, I read the following in the log files and the site was responding as expected.

On a second publish to a different Windows Container for Web Apps I got this message in the D:\home\LogFiles\*_docker.log logs:

This happened because I am so used to selecting the publish menu item and publishing directly to a web app, I forgot that I need to pish the image to docker and then created the web app from the portal as seen in Figure 1 and 2 earlier in this article.  In noticed, see Figure 4 that the working one was considered a container while the broken one was not.

I deleted the broken app and deployed it correctly and all worked fine.

Some months ago I installed and configured a Nano server and wrote some posts about it.  Here they are.  I hadn’t seen much about Nano since I wrote them, it is nice to see it getting some traction.  I am especially interested in trying this one out “How to connect and configure IIS running on Nano”.  I see a link to Win-RM in the portal that will allow me to remote manage.

← How to add Docker support to your ASP.NET Core application
What is self-contained deployment mode, works locally but not after deploying →