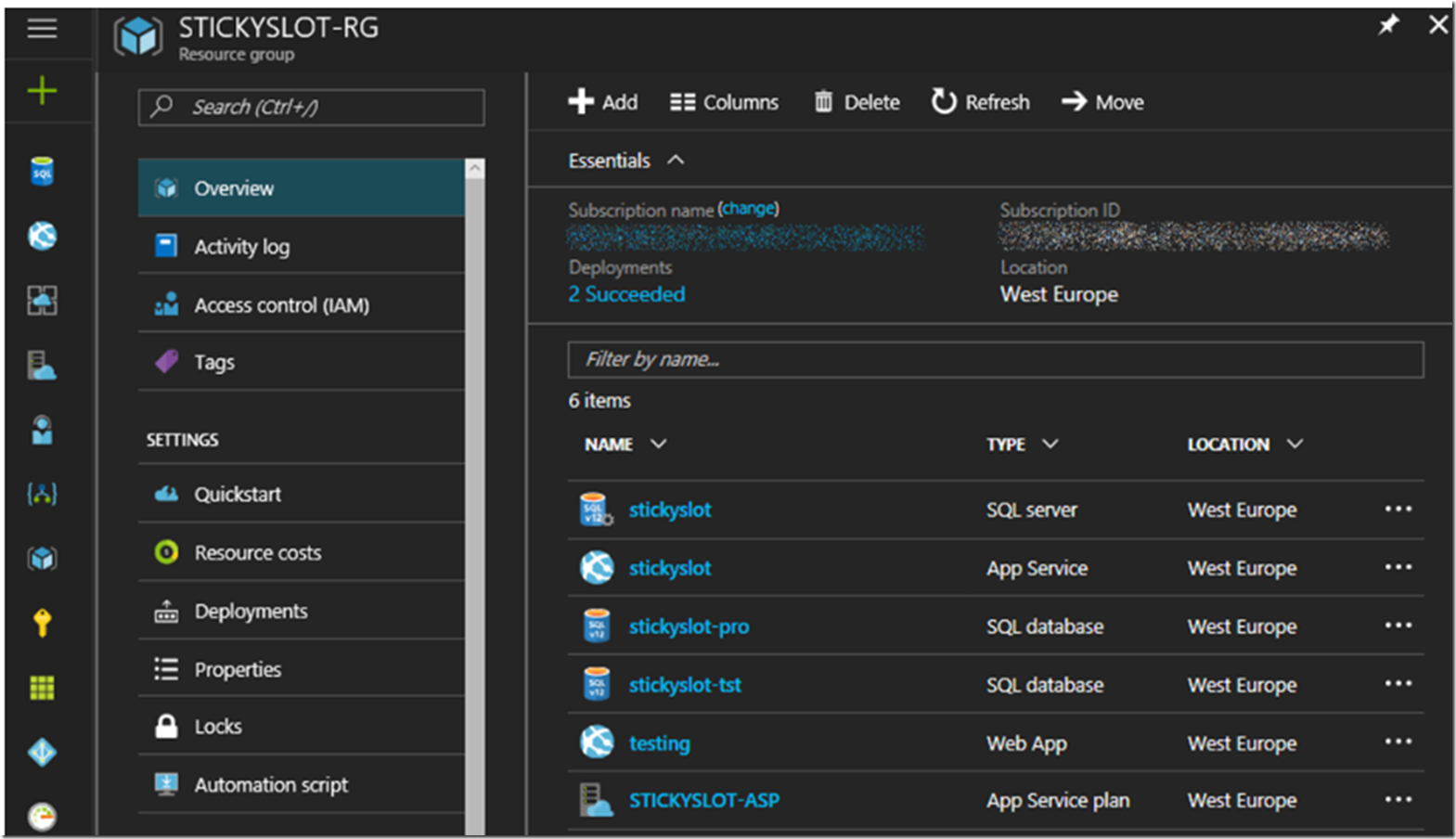 In this article I am concerned with the swapping of the Azure App Service Web App deployment slots from PRO (production) to TST (a testing instances).  The thing is, by default, App Settings and database connection strings are NOT sticky to the slot and will follow the Web App when the test slot is swapped with the production slot.  In this scenario, it means that when I swap my testing deployment slot, which is, by the way, getting its data from the stickslot-tst database, to production, the then swapped Web App will be pointing to the stickyslot-tst database instead of the stickyslot-pro database.  Therefore, I need a way to swap the Web App development slots but keep the database connection string of the current production Web App pointing to production and the testing pointing to the testing database.  This is achieved by making the setting ‘sticky to the slot’.

Assume that for my production Web App, I have 2 values I want to remain ‘production’ when I perform a swap.  See Figure 2.

Figure 2, sticky slot settings that remain in production even when swapped with a testing slot

Notice there is a App setting with the name STICKSLOT with a Value = ProductionEnvironment and a Connection string called StickySlotConnectionString that contains the production database name, user is and password, for example.  Most importantly, notice that the Slot setting check box is selected which means that is remains with this Web App and is not moved when swapped.  Notice also that in the testing development slot, see Figure 3, I have the same App Setting and Connection string (Key and Name), but they have different values, also with the Slot setting checkbox checked so it remains on the testing Web App, no way do I want my testing Web App to ever point to the production environment.

Figure 3, sticky slot settings that remain in testing even when swapped with a production slot

I have added an additional App setting, MoveWhenSwapped, which I have not made sticky, I.e. this one will move with the swap.  Therefore, when I swap production and test, then that App setting will be in the production Web App configuration and not in the testing one.  Let’s see, when everything is all tested and ready for production on the testing environment, navigate to the testing Web App and click the Swap link, as shown in Figure 4.

There is a feature called “swap with preview” which has a nice write here.  Basically, this feature let’s you point your testing environment to production just to make sure everything is working as expected before you begin to route the real traffic.  Make sure you either complete the swap or roll it back as you wouldn’t want to keep your testing pointing to production for very log.  This may not work in all scenarios if there is a database structure change which may break the production environment if deployed and the testing instance doesn’t run on the exiting production database without upgrade.  However, give it s shot JIC.  Nonetheless, make the swap and then check the production Web App to confirm the App Settings and the Connection string are the expected result.  Indeed they are as show in Figure 5.

The values remained as expected and the MoveWhenSwapped moved from the testing to the production Web App process.  Also note that the MoveWhenSwapped moved, which means it no longer exists on the testing Web App.  This means, if you want to swap your Web App and want the connection string to remain as is, then mark the setting as sticky by selecting the Slot setting check box and you are all set.

A little deeper we go

Some questions I had:

To access the connection string from either the value configured in the portal or in the web.config you use the following code.

Pass the name of the connection string and the value is returned.

To access the app setting value, use the following.

Nothing really, as long as the name is unique.  Watch out that you do not have the same name for any connection string or app setting.  If this happens, then, when I tested it, the values configured in the portal were the values accessed by the code.  Therefore, if you have a connection string called StickySlotConnectionString configured in both the portal and a web.config, then changes you make to the value in the web.config will be ignored.