I like keeping my things in order, so over time as my Azure consumption grows, I begin to recognize and learn that maybe I should have put all the related resources into the same resource group. Here is an example of how I moved an App Service Web app from one resource group to another.

I have a Web App in the FROM resource group hosted on an App Service Plan in West Europe, I.e. AM2, that I want to move West US, I.e. BAY, as shown in FIgure 2.

Now, run the following PowerShell cmdlets to get the necessary information to move the Web App.

Figure 3, getting the ResourceId for moving an Azure App Service Web App

Next, execute the following command to move the Web App to the TO resource group, when prompted, as shown in Figure 4, select Yes if you want to really change the resource group.

Check the configuration of the App Service and you will see that the Web App is now in the TO resource group as shown in Figure 5.

Notice that the Resource Group is now set to TO as desired. Also notice however, that the Location and App Service Plan have not been changed. The movement of the Web App to another resource group is only a logical, or reference data change, the physical location of the Web App does not move. In my opinion, if you need to move the actual location of your Web App, my recommendation is to do it manually or clone it as discussed here. You can move the Web App to a different App Service Plan (ASP) from the portal by selecting Change App Service Plan from the settings blade. The result opens a blade showing the other ASPs in that same scale unit to which the Web App can be moved to.

Moving resources within the portal

Instead of using PowerShell you can also move the resources from within the Azure Portal, as shown in Figure 6. For example click on the existing Resource Group where the resource exists then click the MOVE button which renders the Move Resources blade. Select the resource that can be moved and, from the dropdown select the Resource group to which you want them to be moved to.

Notice that the FROM resource group is located in West Europe and has 3 Web Apps in 2 different regions. Also, not shown above, all 3 of the Web App are within different App Service Plans. Navigate to the Resource Group to which these Web Apps were moved to and you will see them there, as shown in Figure 7. 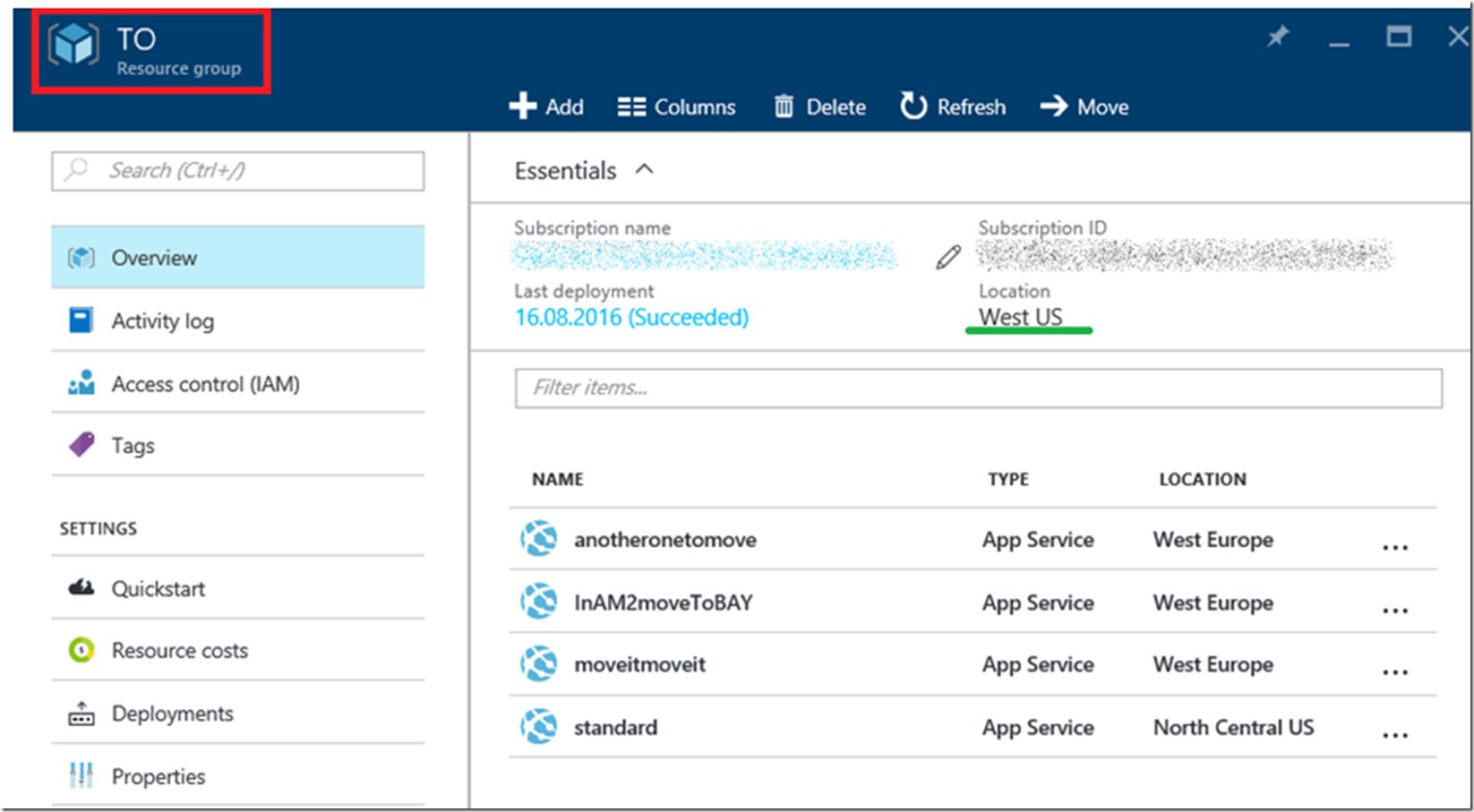 Other options and links

Here are some helpful links on the subject.