I have written some instruction on how I setup a WebDAV installation that uses Windows Authentication and UNC here.

An important concept to understand before you start setting up a WebDAV solution using this configuration is the difference in behavior when you are logged on and testing from the IIS server versus testing from a client machine. When you are on the IIS server, you are not going to be using Kerberos, instead you will use NTLM. This is just how it is. However, when accessing the WebDAV solution from a client machine, if IIS and the browser are configured to use Kerberos, then it will be. You can use Fiddler or Network Monitor to see which authentication provider is used for authentication. Here is an article I wrote about how Negotiate in IIS works.

That being said, here are some experiences I had when setting up a WebDAV installation using Windows Authentication and a UNC share.

Initially, looking at these errors and having seen them very often in the past, I thought, ok I can solve these easy. Unfortunately, it did not turn out that way….

I used the KERBLIST tool to check what tickets I had and as seen in Figure 4, there were none.

I then refreshed the page and BABANG!!! There is was, I got this! Figure 6 shows the INDEX.HTML file I hosted on the UNC share protected by Windows Authentication.

Checked the KERBLIST again and after the refresh I have 3 tickets on my machine, as illustrated in Figure 6.

Unfortunately, from my client machine I still received a challenge/response pop-up and after 3 attempts received the 401 message as shown in Figure 7.

Additionally, prior to disabling Anonymous Authentication, I set the useAppPoolCredentials true, as shown in Figure 8. After this, I was able to almost reproduce the same behavior I experienced when logged onto the IIS server.

My initial request resulted in a 500 response as shown in Figure 9, when I looked at the IIS log for the request, it was indeed a 500.19 HTTP Status response. When I refreshed my request, I did not receive a request for my credentials, but instead, received a 401 directly, as shown in Figure 10. I felt I was making some progress.

In this case, the disabling of Anonymous Authentication had no impact.

I like to use Process Monitor, sometimes it just jogs my brain and leads me to my next steps. Figure 11 is the Process Monitor log when I made the request from the IIS server and Figure 12 is from the client. Nothing really unexpected there.

What I learned was that in both cases the same User credential were being used to perform the authentication, but I had left the Connect As settings default, which means that pass-through authentication is used. Figure 13 shows this setting. 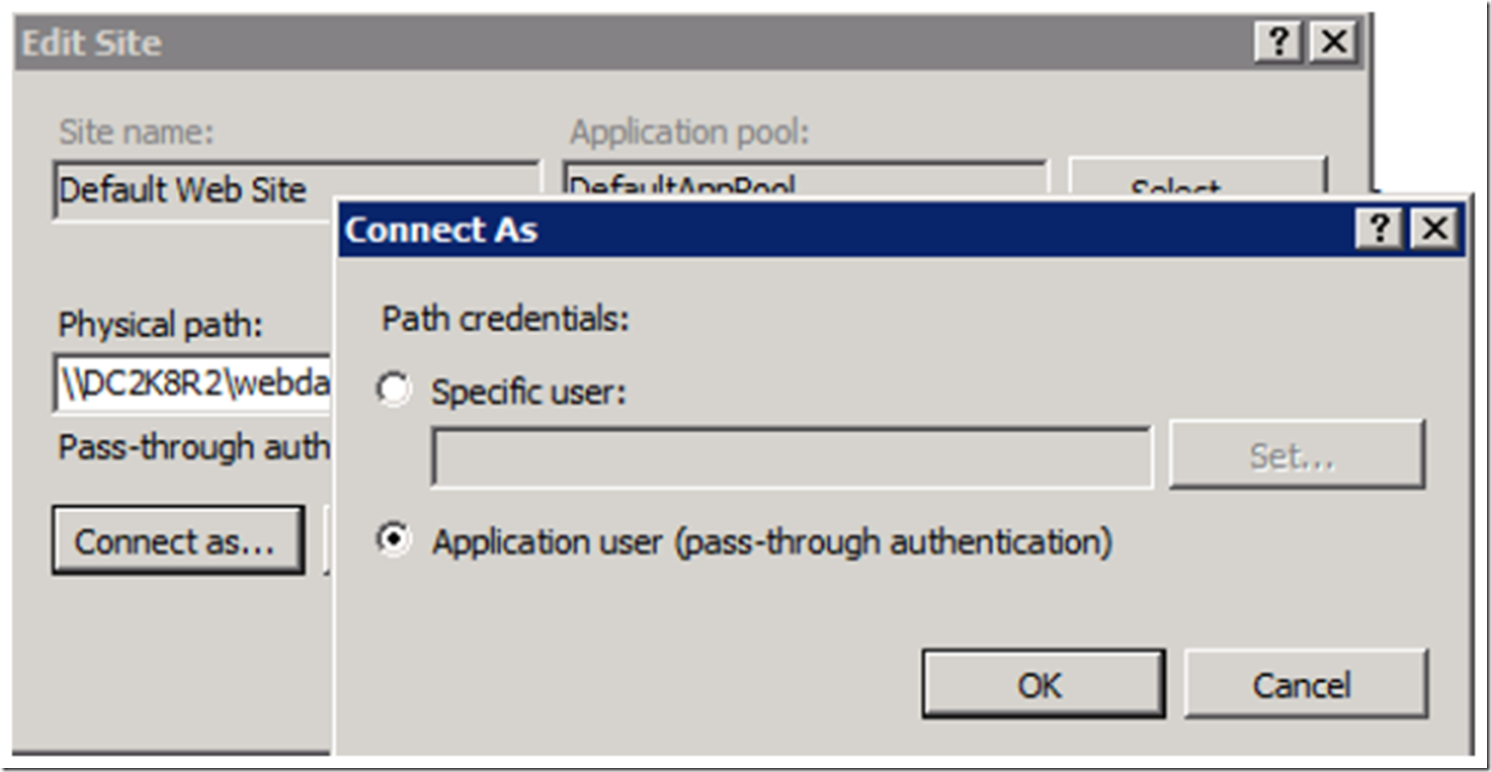 If this is set, doesn’t that mean my credential is used for authentication? Well, this is where it got complicated for me originally, because this issue crosses a technology boundary, the issue was that my account nor the IIS web server was configured for delegation. Unless you have seen this problem before or you are/were a domain administrator, you would probably not know this. Well, there you go, now you know, hey that rhymed.

Using the ApplicationPoolIdentity for WebDAV

For the machine account I clicked the “Trust this computer for delegation to any service (Kerberos Only)” as shown in Figure 15. 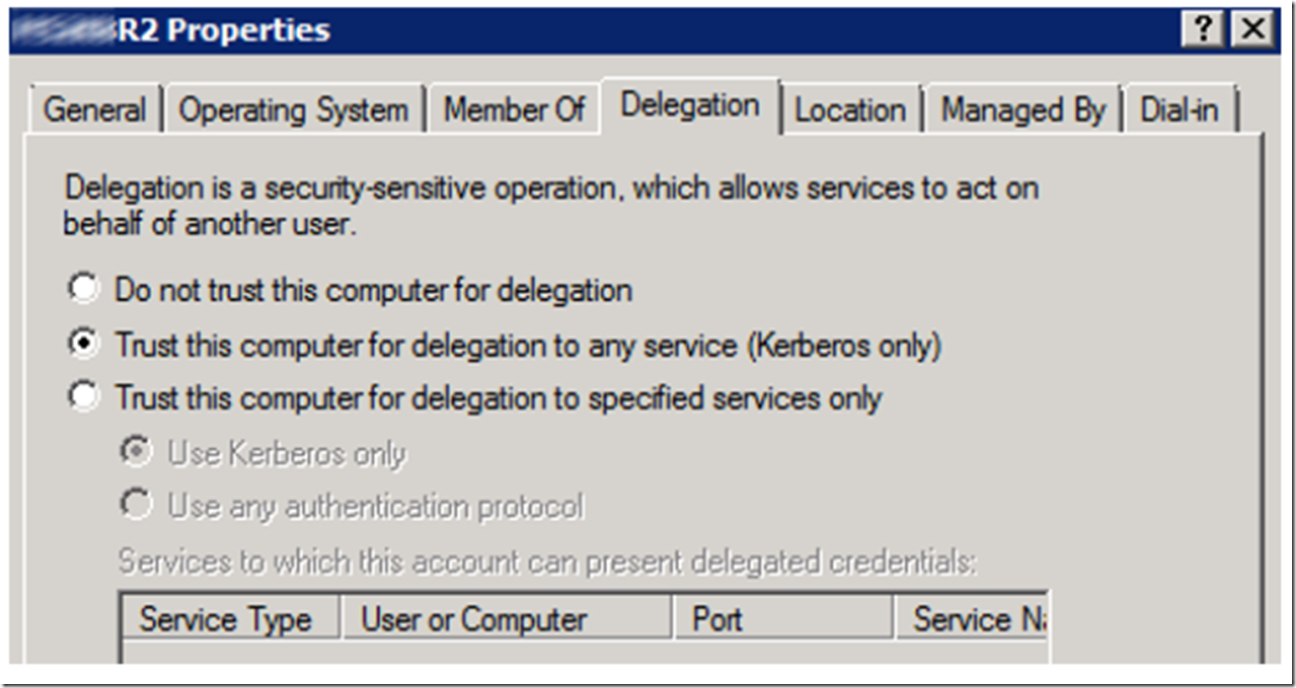 I then accessed the WebDAV website from the client machine and received a challenge/response, man I was disappointed, I thought I had this. I went through the process of entering my credentials for the 1,000th, wait, 1,000,000th time and WHAT? It worked after the first try, I saw the same result as previously shown in Figure 6…progress.

Why did this happen? I used KERBLIST to look at the tickets I had cached on my client, Figure 16, which shows the one I was using.

What I noticed was that there was no DELEGATE ticket flag. This is a very important topic to mention. The ticket will remain cached on my client machine, so regardless of what I change on the domain, for example, delegation, it will not be realized until I delete the cached ticket or the End Time or Renew Time thresholds are breached. There may be some way to force out these changes, but I am not aware of any domain commands like that.

I used KERBLIST to purge the locally cached Kerberos tickets so that my next request would result in the retrieval of the fresh ticket with DELEGATE. My next attempt to access the WebDAV website using Windows Authentication and a UNC resulted in SUCCESS, no challenge/response window and the sweet rendering of the INDEX.HTML file.

I used KERBLIST to look at the ticket and DELEGATE was there, as shown in Figure 17.

Using a custom identity for WebDAV

Before I started this one, I was sure to remove the delegation of the machine account and purge my locally cached Kerberos tickets. I tested accessing it, and got the same error as always from the client. 3 attempts = 401…enough said. I wanted to get this resolved as fast as possible. I did notice that the rendered error message changed, as shown in Figure 18.

When using a custom identity, you must do 2 things:

Figure 20, create an SPN for the WebDAV / application pool account

Figure 21, Delegation tab is visible and can be configured

Select the “Trust this user for delegation to any service (Kerberos only)” and save the configuration. Execute the following command, as shown in Figure 22, to make sure the SPN exists.

Figure 22, Check for the existence of the SPN

For some reason, this did not work for me…took me some time to figure out, but what I know about Kerberos and using SPNs is that if the SPN used to validate the request does not exist or is wrong, then Kerberos will not work. I used Network Monitor to check and see which SPN is being used, and found that it was using the FQDN and not the NETBIOS name. I created the required SPN, made sure it was successful, as shown in Figure 23.

Figure 23, Create another SPN and check for the existence

And that is it, it works…see Figure 6, which while working on this article became a very beautiful image. Here and here are 2 additional links for troubleshooting the WebDAV redirector.